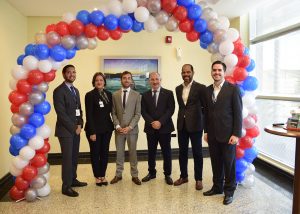 American Airlines connected Aerodom’s Santo Domingo Las Américas International Airport with Dallas/Fort Worth and Charlotte Douglas on 8 June, starting weekly flights to both US hubs, and doubling the number of destinations it now flies to from the Dominican Republic’s second busiest airport from two to four.

SANTO DOMINGO, Dominican Republic, 2019-Jun-10 — /Travel PR News/ — The world’s largest carrier, American Airlines, has expanded its network footprint in the Dominican Republic, launching two new weekly connections to Santo Domingo from its hubs at Dallas/Fort Worth and Charlotte Douglas in the US. As a result, the oneworld carrier will double its direct flights to Santo Domingo Las Américas International Airport from two destinations to four.

The new route duo started on 8 June, and both will be flown on a weekly basis. Operated year-round, American will fly Saturdays with its 150-seat A320s on its route from Charlotte Douglas. Services depart the US at 18:00 and arrive at Las Américas at 21:29. Flights leave Santo Domingo at 06:38 on Sundays, before landing in North Carolina at 10:20. To be operated initially as seasonal service, the 1,965-mile sector from Dallas/Fort Worth will also be flown on Saturdays until 17 August. These flights, using the carrier’s 160-seat 737-800 aircraft, will leave Texas at 12:20, before touching down in the Dominican Republic at 17:50. The returning sector utilises a Miami-originating aircraft allowing it to depart Santo Domingo at 13:50 the same day, before landing back in the US at 17:39.

“We are thrilled that American Airlines has chosen to expand its existing operations at Santo Domingo Las Américas International Airport,” said Alvaro Leite, CCO of Aerodom. “As a result of this growth, American will consolidate its position as our third largest provider of seats this summer. I look forward to working with the airline on opening access to its other major gateways, as well as building weekly frequency to Charlotte Douglas and expanding the dates offered on the new seasonal service to Dallas/Fort Worth.”

Oliver Bojos, Country Director of American Airlines in the Dominican Republic, highlighted that these new routes and added frequencies are in response to the 44-year commitment the airline has made to the country and its local customers. “Today we have destinations other than those traditionally travelled by our Dominican passengers. We have noticed that the market has changed, and our routes and frequencies seek to satisfy those needs,” said Bojos.

American already flies four times daily to Las Américas from its Miami hub, as well as offering a weekly service from Philadelphia. In total, the carrier will operate 31 weekly frequencies from the airport during S19, and a weekly capacity of nearly 5,000 seats. Dallas/Fort Worth and Charlotte Douglas are also the airline’s biggest hubs in terms of its weekly seats and frequencies, so passengers will be able to connect onto American’s massive US and international networks too, further increasing the travel options available for those wishing to get to and from Santo Domingo, and indeed the Dominican Republic.

With the start of these new services from American, the Dominican Republic airport now boasts connections to 10 US airports operated by five airlines, according to schedule data for w/c 18 June 2019. Following the commencement of these new flights, Santo Domingo will offer close to 30,000 weekly seats to the US and weekly frequencies to the country will reach 174. As a result of this expansion, the US further strengthens its hold on the #1 spot in terms of 23 country markets which will be served from the airport over the course of S19.

Aeropuertos Dominicanos Siglo XXI (Aerodom) is an airport operator in the Dominican Republic that holds the concession to operate six airports in the country, due in 2030. It manages an average of five million passengers annually traveling to 58 cities around the world. Since 2016, the company is part of the leading international airport group VINCI Airports.

The Las Américas International Airport – José Francisco Peña Gómez is the main air terminal of the Dominican Republic because of its location and ranks second in the flow of regular passengers in the country. In 2018, Aerodom announced the implementation of important infrastructure improvements as part of an aggressive modernization and optimization plan that seeks to improve the passenger experience, facilitate exports and offer the best entry doors to the Dominican Republic.

New routes still to launch at Aerodom airports in 2019:

Through its expertise as a comprehensive integrator, VINCI Airports develops, finances, builds and operates airports, leveraging its investment capability, international network and know-how to optimize the management and performance of existing airport infrastructure, facility extensions and new-build construction projects. In 2018, its annual revenue for managed activities amounted to €3.6 billion, for consolidated revenue of €1.6 billion. More comprehensive information is available on www.vinci-airports.com