Bangkok, 2013-08-28 — /travelprnews.com/ — Two of Thailand’s top state enterprises involved in promoting travel and tourism have joined forces to boost the number of air travellers to the kingdom and meet the national objective of better spreading the benefits of tourism nationwide.

On August 23, Mr Suraphon Svetasreni, Governor of the Tourism Authority of Thailand and Mr. Pongsak Semson, Vice Chairman and Acting Managing Director, Airports of Thailand PLC signed a Memorandum of Understanding (MoU) that will see the two organisations pool their resources to achieve a broad level of tourism promotion goals.

To be effective for three years from 1 September, 2013, to 31 August, 2016, the MoU is the first of its kind ever signed between the two state-owned enterprises.

More than 80% of Thailand’s total visitor arrivals come by air via these international gateways.

The TAT-AOT MoU will see the two state enterprises undertaking a broad range of marketing, promotional, research and human resource development activities to increase the number of both arriving and transit passengers going through these airports.

In a statement, Mr. Suraphon said that the MoU will be of significant benefits to the many airlines flying to Thailand, especially in the build-up to the upcoming integrated markets of the ASEAN Economic Community when air connectivity will be critical to opening up access to both the gateway and secondary cities of ASEAN.

The two state enterprises will also work on promoting domestic travel, especially during the off-season months. They will also organise joint seminars, carry out research, exchange information and feedback, publicise travel and tourism news, and work together with their respective partners.

Mr. Suraphon said, “TAT is very pleased to join forces with the management of AOT which recognises the importance of promoting tourism to Thailand and the need to project a positive image of the country.

For the vast majority of our tourists, Thailand’s international airports are the first point of landing, and it is important to make the arrival process pleasant and efficient. We will be working together to forge a common strategy to penetrate target markets and increase flight services to the international airports.”

Mr. Suraphon said the agreement will also boost the entire aviation sector and attract more airlines from both the short-haul and long-haul markets, including scheduled and charter flights. It will also reduce congestion at Suvarnabhumi Airport by helping promote more flights to the provincial airports, thus better dispersing visitor arrivals around the country.

The joint activities will also help enhance the position of Thailand as an “aviation hub” of Asia.

In recent years, AOT has joined with TAT by attending major international travel fairs; such as, ITB in Berlin, World Travel Market (WTM) in London, as well as a number of tourism promotion roadshows in Asia.

In his comments, Mr. Pongsak said AOT has invested heavily over the years in upgrading Thailand’s international airports to better service passengers and airlines. He said that in terms of both passengers and cargo, airports are the most important conduits for national economic development and provide the connectivity that is becoming increasingly critical in a global economy.

Mr. Pongsak added, “AOT and TAT are both linked by shared interests in facilitating the air transport sector and tourism promotion. Aviation linkages will be critical for the success of the ASEAN Economic Community in 2015 and there is no doubt that we can be more effective by pooling our resources and expertise.” 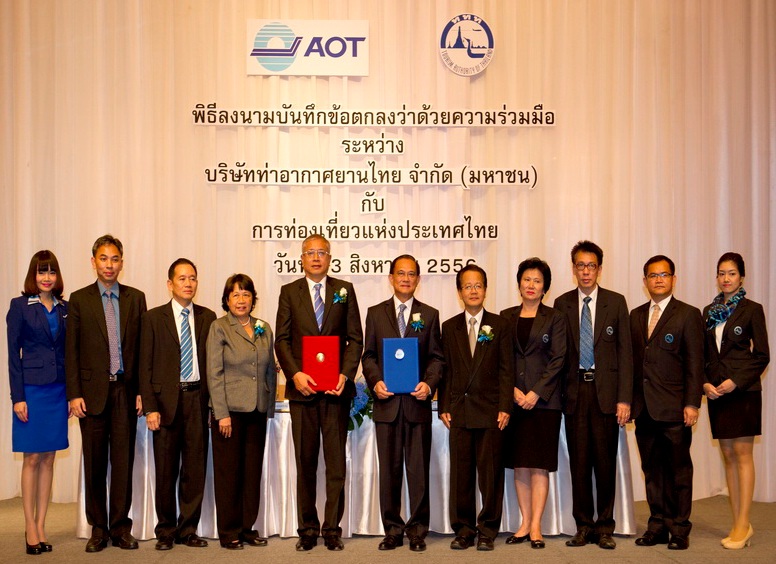