Berlin, Germany, 2013-10-31 — /travelprnews.com/ — Each kilogram less weight carried on board an aircraft helps to save fuel and reduce CO2 emissions. That’s why airberlin is putting a pilot scheme into practice, as part of its eco-efficiency programme, in the course of which all the objects which are not permanently attached to an A330 are removed and weighed. The objective of its “Papa Charlie” Clear Out Mission (the title of which is taken from the last two letters in the registration number of the Airbus A330) was to identify those items which were not absolutely essential to flying the plane, in order to further optimise airberlin’s ecological footprint.

38 members of staff from six different departments collaborated on this project, which was carried out in the airberlin technik hangar in Dusseldorf, and in the course of a few hours they removed all the items that were not actually attached to the plane from the long-haul aircraft, then weighed and recorded them. Afterwards, a team of airberlin experts assessed whether each item could potentially be replaced by a less heavy alternative. For example, a hard copy of the manual does not need to be carried since it is already available in digital form on the computer in the cockpit.

In total, there were around 630 kilos’ worth of items on board the D-ALPC which were not permanently attached to the aircraft. Of these, 335 kilos were left on board; in the case of another 162 kilos, airberlin’s experts needed to carry out further tests; for 116 kilos a lighter-weight alternative was sought and it was possible to remove 17 kilos from the aircraft without further ado. “This project has demonstrated that airberlin is already very well positioned in terms of eco-efficient flying, since only a few items were found that were non-essential. Nonetheless, the expense has paid dividends and reduced annual CO2 emissions per aircraft on long-haul routes by about eight tonnes, which is equivalent to 2.5 tonnes of fuel,” said Christian Bodemann, Head of Cabin Maintenance at airberlin technik and the project manager of Clear Out. The mission has had a further positive outcome: during the detailed analysis carried out on the aircraft’s non-fixed furnishings, it was possible to identify several follow-on projects, which airberlin will now continue to pursue as part of its efficiency drive.

In 2012, Germany’s second largest airline set a new record with its average fuel consumption of 3.4 litres per 100 passenger kilometres flown. Through all the measures implemented last year airberlin reduced its CO2 emissions by a total of more than 100,000 tonnes. That is the equivalent of nearly 7,000 flights from Munich to Palma de Mallorca. Only recently, airberlin received the “Silver Eco-Airline of the Year” award, given as part of the Eco-Aviation awards, by the American aviation magazine Air Transport World, in recognition of its commitment in the area of eco-efficiency.

A mulitmedia kit about eco-efficient flying including a video clip about the Clear Out is available at airberlingroup.com/en/press/news/eco-efficiency. 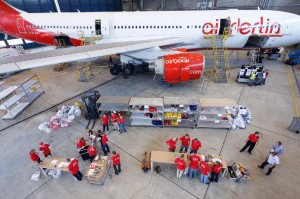 The objective of the “Papa Charlie” Clear Out Mission was to identify those items which are not absolutely essential to flying the plane, in order to further optimise airberlin’s ecological footprint.