Sharp noted that 53 years ago the first Four Seasons hotel launched in Toronto and it has been nearly 23 years since the iconic Four Seasons Resort Nevis opened its gates in the Caribbean.  Today, Four Seasons Hotels and Resorts includes 92 properties in 38 countries and is the world leader in luxury hospitality.

Minister Brantley also shared with Sharp the transformative impact that Four Seasons Resort Nevis has had on the island over the past two decades and expressed his gratitude on behalf of the people of Nevis.

The Minister used the opportunity to update Sharp on developments for Nevis and in particular the Nevis Island Government’s initiative for geothermal energy. Sharp began his career as an architect and expressed a deep understanding of geothermal, disclosing to the Minister that his residence is powered by geothermal and that Nevis’ advances in this regard was welcome news.

Sharp graciously renewed his commitment to Nevis, with fond recollections of how Four Seasons Resort Nevis proved to be an incredible learning ground for the brand opening offshore hotels in different destinations and cultures.

Sharp continues to serve as Chairman of Four Seasons Hotels and Resorts and is actively involved in promoting the company’s brand and values around the world, and he is also involved in all its major decisions. The company was taken private in 2007 in a deal backed by Bill Gates and Saudi Prince al-Waleed bin Talal.

The Minister presented Sharp with works on Nevis and her history saying, “Mr. Sharp is as gracious and as enigmatic and engaging as any human being I’ve met. It was my honour to have been able to spend some time with him.”

Sharp presented the Minister with an autographed copy of his book Four Seasons, The Story of a Business Philosophy and a copy of his wife Rosalie Wise Sharp’s book Rifke, An Improbable Life. 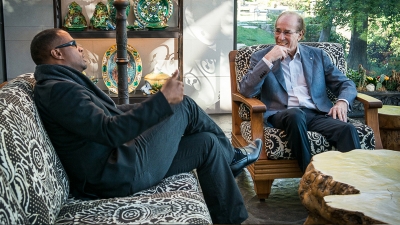