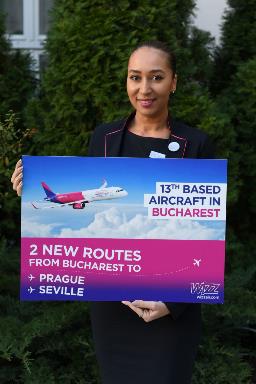 NEW BASED AIRBUS A321 AIRCRAFT AND. TWO NEW ROUTES TO PRAGUE AND SEVILLE.

BUDAPEST, Hungary, 2019-Dec-06 — /Travel PR News/ — Wizz Air, the largest airline in Romania and one of Europe’s fastest growing airlines today (DEC 4, 2019) announced further development of the operation in Bucharest basing 1 new Airbus A321 aircraft. The new aircraft will enter the WIZZ fleet in July 2020, and will increase the local Bucharest fleet to a total of 13. From July 2020, Wizz Air will also launch two new exciting routes from Bucharest to Prague, in Czech Republic and Seville, in Spain, which will be only connection between the Romanian Capital and the Andalusian city.

Prague is one of the most interesting cities in Europe, ranking in top 10 most visited capital across the continent. Well renowned for its historical landmarks like the Charles Bridge above the Vltava River, the Prague Castle, or the beautiful old town square with the Astronomical Clock, Prague can also offer a glimpse into contemporary design and architecture, with the Dancing House which is one of the city landmarks. Gastronomy enthusiasts will feel like home in Prague, famous for its great beer and tasty food. So Prague offers an authentic journey into the history while also providing relaxing moments on Vltava cruises. On the other hand, Seville, the capital of the Andalusia region in Spain, offers the best of the Latin culture. The must see list needs includes places like the emblematic Giralda (the bell tower of the Cathedral), the Basilica of La Macarena, Centro Ceramica Triana or The Guadalquivir River and several enchanting gardens.

WIZZ is constantly adding new routes to the Romanian network. In the second half of 2019 WIZZ announced new destinations from Bucharest to London Southend and Edinburgh or Lyon, which offers Romanian passengers the opportunity for new travel experiences in England, Scotland and France.

With this brand new addition in the Romanian fleet, Wizz Air will have 30 based aircraft in Romania in 2020 employing more than 1,100 customer-oriented crew. Wizz Air now offers 153 routes to 20 countries from 10 Romanian airports and has just recently welcomed its 50 millionth passenger in Romania and 20 millionth passenger in Bucharest. Both of them were awarded with EUR 250 vouchers for Wizz Air flights. Wizz Air is committed to the Romanian market and offers almost 11 million seats on sale on its Romanian routes in 2020, which represents a 10% growth year over year.

Tickets for the new route are already on sale and can be booked from only 89* RON on wizzair.com.

Paulina Gosk, Corporate Communications Manager at Wizz Air, said: “We are happy to announce aircraft no. 13 in the Wizz Air fleet based in Bucharest as well as two new destinations. Seville is a completely new destination for the Wizz Air network and we are introducing it from Bucharest starting in July 2020 together with Prague, which we know is highly appreciated by Romanian tourists. Thus we remain committed to Romania and to providing exciting new travel opportunities to the most attractive destinations across Europe and beyond. Our highly trained and friendly crew will soon welcome passengers on board of the new Airbus A321 aircraft that will start operating in Romania from summer 2020.”

*One-way price, including administration fee. One carry-on bag (max: 40 x 30 x 20 cm) is included. Trolley bag and each piece of checked-in baggage is subject to additional fees. The price applies only