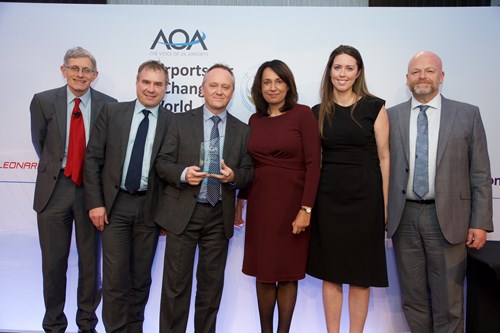 Liverpool, UK, 2019-Dec-06 — /Travel PR News/ — For the second time within a week, Liverpool John Lennon Airport has received another top industry accolade and recognised as being the best UK airport of its size.

The award was voted for by Airlines UK, a trade organisation that represents UK airlines and awarded to LJLA in recognition of the Airport’s success in offering a best in class passenger experience and becoming the Faster, Easier, Friendlier Airport of choice for passengers from across the region.

The Airport’s award entry focused on a number of achievements including more destinations and more passengers whilst maintaining the highest levels of customer service. Queue times to pass through security for 97% of all passengers is just 10 minutes or less and Liverpool is the only UK airport to receive a 5-star airport rating by the world’s leading air travel intelligence company OAG for flight punctuality, confirming its status as the UK’s faster, easier, friendlier airport.

John Irving, CEO for Liverpool John Lennon Airport commented, “This is a special award for the Airport as it demonstrates how well respected we are not only by passengers from across the region, but within the aviation industry too.

This award is testament to all the hard work put in by our employees and business partners here at the Airport to ensure the highest levels of service to both our passengers and airline customers.”

Karen Dee, Chief Executive of the AOA said, “The AOA Awards showcase the sector’s vibrant and innovative work that is globally leading. The Awards were a sample of that best-in-kind work, from improving aviation’s sustainability to continuously improving our passengers’ experience of airports and aviation. Congratulations to them all!”