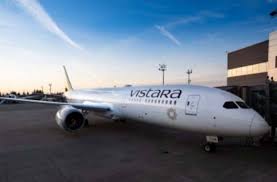 Delhi, India, 2021-May-13 — /Travel PR News/ — Vistara, India’s finest full-service carrier and a joint venture of Tata group and Singapore Airlines, today (10 May 2021) announced special, non-stop flights between Delhi (DEL) and Tokyo (HND) starting 16 June 2021. The airline will fly once a week between the two capital cities under India’s travel bubble agreement with Japan. The airline will use its Boeing 787-9 Dreamliner aircraft with three-class cabin configuration to serve the route. This makes Vistara the only Indian carrier to offer the choice of flying Premium Economy class in addition to Business and Economy cabins.

Vistara has also trained its cabin crew in the Japanese language to extend the warmth of true Indian hospitality to travellers from Japan.

Mr. Leslie Thng, Chief Executive Officer, Vistara, said, “Far East has been an extremely important geography for our global expansion from the beginning for its tremendous growth potential. We are delighted to add Japan to our international network, under the travel bubble and  look forward to providing the best of Indian hospitality while maintaining the highest standards of safety and hygiene for our customers on this sector.”

Bookings for the flights are being progressively opened on all channels, including Vistara’s website, mobile app, and through travel agents. Introductory, all-inclusive, round-trip fares between Delhi and Tokyo are as follows:

SCHEDULE OF FLIGHTS TO AND FROM TOKYO HANEDA:

All timings shown are in local time zones

Vistara will accept all eligible customers meeting visa/entry requirements in both countries, as specified by the respective government bodies. Vistara strongly encourages its customers to fully understand these guidelines before making their bookings.

Vistara is India’s highest-rated airline on Skytrax and Tripadvisor, and has also been the winner of several ‘Best Airline’ awards. In a short span of six years since starting operations, Vistara has raised the bar for operations and service delivery in the Indian aviation industry by offering the world-class flying experience to travellers.

About Vistara (TATA SIA Airlines Limited): TATA SIA Airlines Limited, known by the brand name Vistara, is a 51:49 joint venture between Tata Sons Limited and Singapore Airlines Limited (SIA). Vistara brings together Tata’s and SIA’s legendary hospitality and renowned service excellence to offer the finest full-service flying experience in India. Vistara commenced its commercial operations on January 9, 2015, with an aim to set new standards in the aviation industry in India and it today connects destinations across India and abroad. The airline has a fleet of 46 aircraft, including 36 Airbus A320, two Airbus A321neo, six Boeing B737-800NG, and two Boeing B787-9 Dreamliner aircraft, and has flown more than 20 million customers since starting operations.