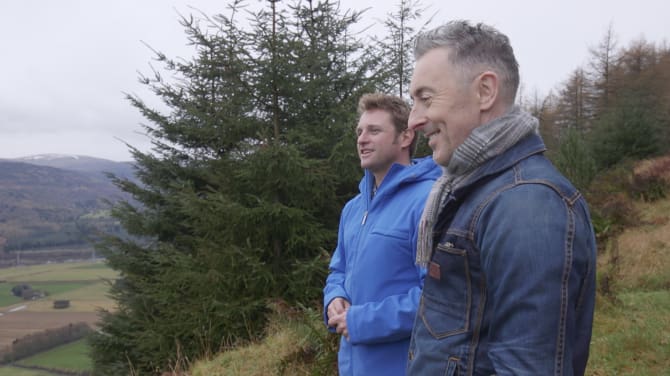 1st Look is a popular lifestyle magazine show which broadcasts across America immediately after Saturday Night Live. The episode, which was planned and developed by VisitScotland’s US Global Brand Team, saw Alan and George travel to Scotland for a week-long shoot, which took in Edinburgh, the Scottish Borders, Perthshire, Angus, Glasgow and Loch Lomond.

Filmed through Alan’s eyes, the aim of the programme was to inspire US visitors to follow in his footsteps and plan their own visit to Scotland. Working closely with Scottish tourism businesses, VisitScotland created the show’s filming itinerary, which saw the hosts enjoy everything from a traditional ceilidh in Glasgow to a dram by the fireside at Glamis Castle, where Alan recited lines from “The Scottish Play” – Macbeth.

Edinburgh Castle, Glasgow’s Citizens Theatre Alan’s home town of Aberfeldy in Perthshire all feature in the documentary, first broadcast in the United States in February, while Alan and George are also given a tour of the National Portrait Gallery by First Minister Nicola Sturgeon.

Ahead of its broadcast, VisitScotland organised a private screening of the episode for US media in New York, leading to large pieces of media coverage in the likes of Conde Nast Traveler US.

2017 Year of History, Heritage and Archaeology