Cologne, Germany, 2016-Apr-28 — /Travel PR News/ — Another chapter in the history of Munich Airport will begin on April 26, 2016: with the launch of the new satellite terminal – Germany’s first midfield terminal – Europe’s only five-star airport is again setting new standards for excellent service, passenger comfort and sustainability. The satellite terminal is also a continuation of the successful joint venture between Munich Airport and Lufthansa. As in Terminal 2, the partners have joined forces to design, build and finance the new passenger handling facility on a 60:40 basis. The Munich architectural firm Koch + Partner was selected for the design and general planning.

The new facility will give Munich Airport 27 new gate positions where passengers can board aircraft directly without bus transportation. With the new satellite facility, the capacity of Terminal 2, which is used by Lufthansa and its Star Alliance partners, will be increased by 11 million to 36 million passengers per year. As one of the world’s most advanced passenger facilities, the satellite terminal will offer passengers pleasant surroundings with a wide range of shopping and dining options in attractive and spacious areas flooded with natural light. Passengers will also have five new Lufthansa lounges to choose from.

The satellite has no direct landside transportation links. Check-in will take place in Terminal 2. Passengers will then undergo passport screening and hand baggage checks before boarding the airport’s own underground transport system that will take them to the satellite terminal in barely a minute. Here they will experience the same high standards of quality they have come to expect in Terminal 2. Of course they will have free access to the airport-wide Wi-Fi network, and can plug their devices into USB and power outlets in the waiting areas.

Awaiting passengers in the satellite terminal is an entirely new dining and shopping experience, with 15 retail areas, seven restaurants and cafes and three duty free zones in a spacious, 7,000 square meter setting. The architecture, the shopping options and the wide variety of foods and drinks available reflect the Bavarian lifestyle and Munich’s unique character. The satellite also features plenty of services to meet the needs and desires of the modern traveller, including quiet areas with reclining chairs, play areas for children, changing tables in the men’s and women’s washrooms, and four showers. All services are situated at the center of the new building for quick and convenient access by customers. From here the five new Lufthansa lounges are just steps away. With an area of 4,000 square meters, this nearly doubles the total area of the Terminal 2 lounge facilities. The new concept features a roof terrace, panoramic windows and a bar overlooking the airport apron.

Forming the heart of the new passenger facility is the central marketplace, which is flooded with natural light. Market stands, each with a theme, are an authentic tribute to the Viktualienmarkt, Munich’s renowned open-air market.

The satellite also sets new standards for environmentally friendly operations and energy efficiency. Advanced building materials and innovative heating, cooling and lighting technologies reduce energy consumption to a minimum. A 40 percent reduction in CO2emissions in the new facility as compared with the airport’s existing terminal buildings is achieved partly through special “climate-optimized facades”: These 4.5 meter wide zones separate the air conditioned interior of the satellite from the outdoor space, acting as a climate buffer while providing usable space with escalators for passengers to change levels. The facade is made of a newly developed type of glass with a special coating that allows sunlight to enter while keeping out the heat.

The satellite terminal was built within budget and on schedule: Total investments in the satellite terminal amount to about 900 million euros, including the costs for the new building itself, the expansion of the baggage sorting facility and the construction work on the ramps and taxiways near the terminal. The costs for the building and expanding the baggage sorting facility are being shared on a 60:40 basis by Munich Airport and Lufthansa, The entire cost of the improvements to the ramp was covered by the airport.

Preparatory work for the new passenger building started in the summer of 2011. The cornerstone was laid on April 23, 2012, and the topping-out ceremony took place on September 12, 2013. Construction of the building itself was completed in the fall of 2015. This was followed by the operational testing phase, with extensive trials involving more than 3,000 participants playing the role of passengers. 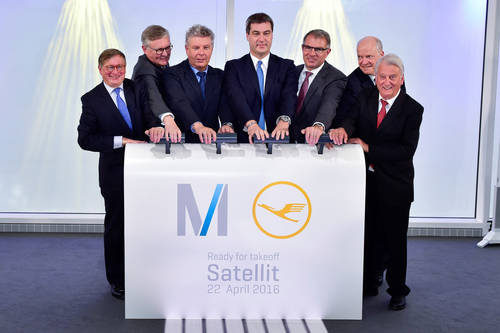