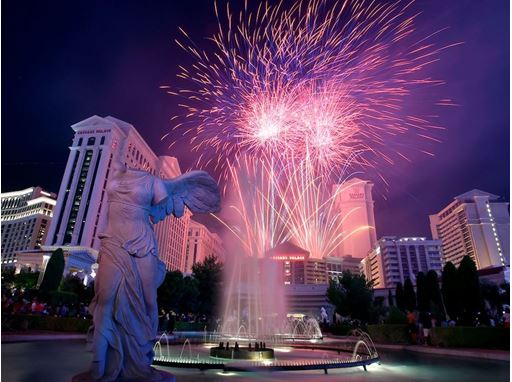 LAS VEGAS, NV, 2022-Jun-29 — /Travel PR News/ — The Entertainment Capital of the World celebrates everything red, white and blue throughout the Independence Day weekend. Visitors can honor the Fourth of July holiday with entertainment, fireworks, poolside parties and more throughout the celebratory weekend.

Fireworks and Patriotic Displays Celebrating the Red, White and Blue

Concerts and Comedy Offer Entertainment Throughout the Weekend

Beats and Bashes to Dance the Night Away

Splash Under the Sun

For a quick and convenient transportation option during the busy weekend, the Las Vegas Monorail offers a variety of tickets from single rides to multi-day passes. With seven stations along the Strip, passengers can easily access all the exciting activities taking place throughout the destination. To purchase tickets or for more information visit lvmonorail.com.

For more Fourth of July fun and summer entertainment, check out VisitLasVegas.com.

The Las Vegas Convention and Visitors Authority (LVCVA) is charged with marketing Southern Nevada as a tourism and convention destination worldwide and with operating the 4.6 million square-foot Las Vegas Convention Center (LVCC). With 150,000 hotel rooms and 14 million square feet of meeting and exhibit space in Las Vegas alone, the LVCVA’s mission centers on attracting leisure and business visitors to the area. The LVCVA also owns the Las Vegas Convention Center Loop, an underground tunnel designed by The Boring Company and the Las Vegas Monorail, an elevated 3.9-mile system with seven stops throughout the resort corridor. For more information, go to www.lvcva.com, www.visitlasvegas.com or www.vegasmeansbusiness.com.