SOFIA, Bulgaria, 2014-03-17 — /Travel PR News/ — The student in his 4th year of studies in the “UNWE”, Ivan Todorov, and the student from 11thgrade of the 130 SOU “Stefan Karadga”, Ivo Ignatov, both played the role of the leading figure of theSofia Airport. They were introduced by the Executive Director Hristo Shterionov at the morning briefing of the managerial team of the airport.

The initiative “Manager for a day” has been introduced by “Junior Achievement” and is under the patronage of the Prime Minister of the Republic of Bulgaria Plamen Oresharski.

The day of the “executive directors” went by as an everyday work days process of the airport would go by- ensuring security, baggage handling, and transporting passengers to the aircraft by buses and sleeves. They “checked” the taxiways which connect the platform to the track; the stands, on which the air vehicles are positioned; and the new extension of the gallery which allows faster passage of passenger traffic.

A part of the work day, the “executive directors” spent in the Operations Center of Sofia Airport where from constantly data about the visibility, condition of the runway, platform and the taxiway is being sent out.

In the late afternoon, the two “executive directors” welcomed the “minister” of transportation, informational technology and communication, accompanied by their “deputies”, and acquainted them with the responsibilities and dynamic life of the capital airport.

After the hectic day, Ivo and Ivan received certificates, from the Executive Director of Sofia Airport Hristo Shterionov, attesting their participation in the national initiative. The young people were sent off by their new “colleagues” with the wish to return as real managers to the Sofia Airport.

You may also be interested in:  The Symbol of Bulgaria, the oil-bearing rose, again to welcome arriving passengers at Sofia Airport 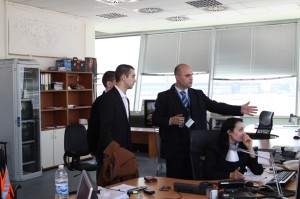