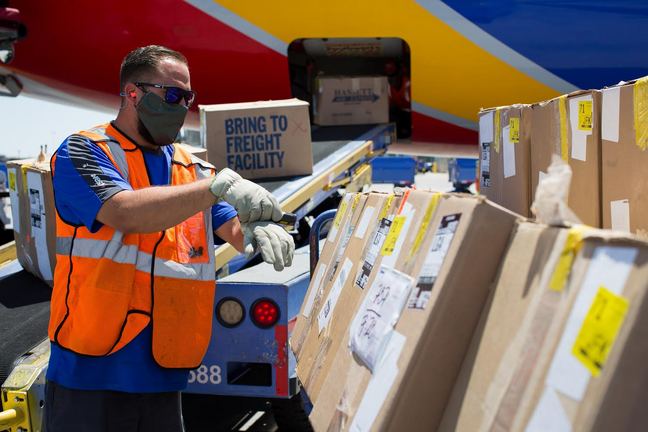 DALLAS, TEXAS, 2021-Apr-08 — /Travel PR News/ — Southwest Airlines Co. (NYSE: LUV) Cargo is being honored for its consistent work delivering outstanding service for its Customers in 2020. The carrier recently was named the Airforwarders Association’s Domestic Airline of the Year for the 12th consecutive year. The Airforwarders Association ranked Southwest Airlines® at the top of its list for the airline’s superior operational performance, service offerings, and overall value for air cargo Customers.

“This past year brought unprecedented challenges, and through it all our People prevailed with an unwavering commitment to deliver the Hospitality and Customer Service that sets Southwest Cargo® ahead of its competitors,” said Wally Devereaux, Managing Director, Southwest Cargo and Charters. “I’m so thankful for our incredible Team across the entire Southwest organization for always taking care of our Customers and each other.”

“Over the past year, our membership, and the industry as a whole, faced incredible challenges that completely changed the way we conduct business,” said Brandon Fried, Executive Director of the Airforwarders Association. “Through this period of turbulence and uncertainty, we have consistently been impressed with how Southwest Cargo has risen to the challenge to provide exemplary service. Southwest Cargo continues to demonstrate innovation, agility, and an admirable commitment to excellence.”

In 2020, Southwest Cargo also celebrated the launch of its new commodity tracking system, giving Customers peace-of-mind with confirmed onboard status of shipments and timely updates as their freight moves from its origin to destination.

In its 50th year of service, Dallas-based Southwest Airlines Co. continues to differentiate itself from other air carriers with exemplary Customer Service delivered by more than 56,000 Employees to a Customer base that topped 130 million Passengers in 2019. Southwest has a robust network of point-to-point service with a strong presence across top leisure and business markets. In peak travel seasons during 2019, Southwest operated more than 4,000 weekday departures among a network of 101 destinations in the United States and 10 additional countries. In 2020, the carrier added service to Hilo, Hawaii; Cozumel, Mexico; Miami; Palm Springs, Calif.; Steamboat Springs; and Montrose (Telluride), Colo. Thus far in 2021, Southwest has initiated service to Chicago (O’Hare) and Sarasota/Bradenton both on Feb. 14; as well as Savannah/Hilton Head and Colorado Springs both on March 11; and will begin service to Houston (Bush) and Santa Barbara, Calif. both on April 12; Fresno, Calif. on April 25; Destin/Fort Walton Beach on May 6; Myrtle Beach, S.C. on May 23; Bozeman, Mont. on May 27; and Jackson, Miss. on June 6. The Company also has announced an intention to initiate new service to Eugene, Ore., and Bellingham, Wash., later this year.