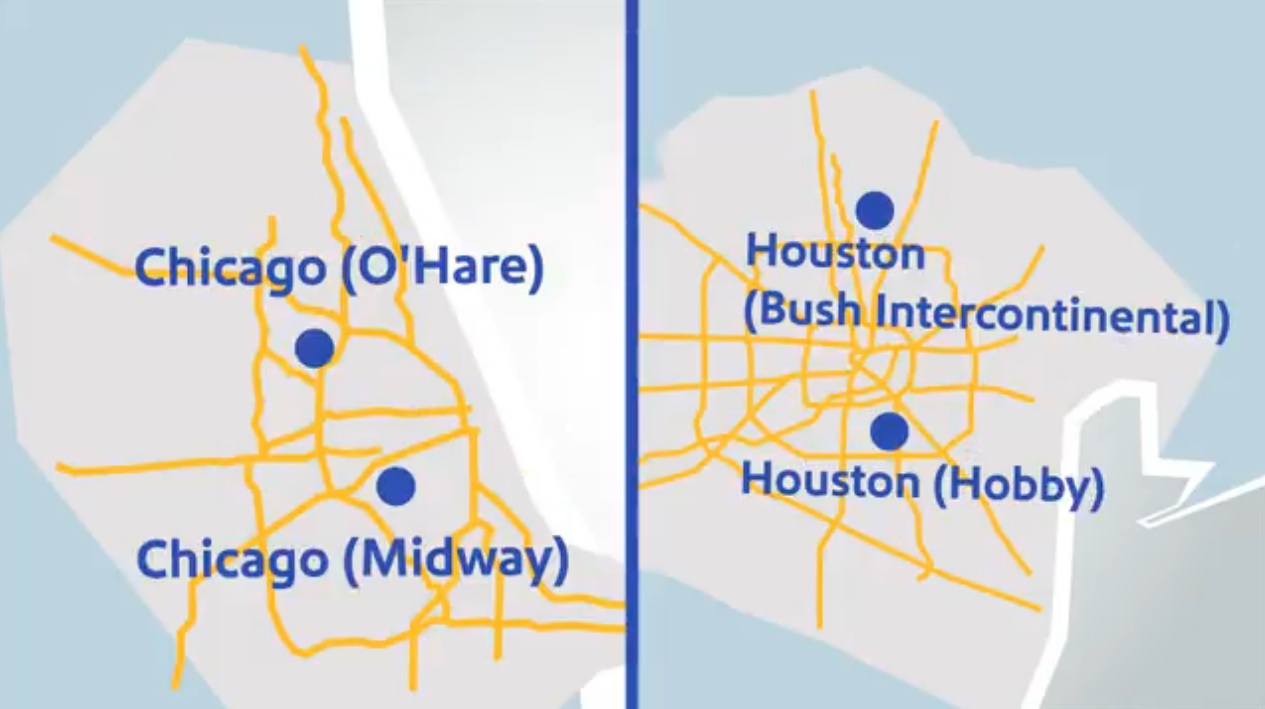 Work is underway to add new service from Chicago O’Hare International Airport (ORD), alongside existing service from the carrier’s longtime Chicago home, Midway International Airport (MDW). Midway remains one of the busiest airports in Southwest’s network. Since first arriving in Chicago in 1985, Southwest has grown into one of the city’s largest employers with more than 4,800 Chicago-based Employees.

As Southwest approaches a commemoration of 50 years of flying, the carrier intends to return to Houston George Bush Intercontinental Airport (IAH), complementing its substantial operation at Houston Hobby (HOU). Intercontinental served as one of three airports where Southwest operated on its first day in operation, June 18, 1971. The carrier moved to Hobby Airport shortly thereafter though it operated service from both airports between 1980 and 2005. Southwest remains a key employer in the City of Houston, providing nearly 4,000 jobs.

“Southwest owes decades of success to our Employees and Customers who have supported our business in Chicago and Houston,” said Gary Kelly, Chief Executive Officer and Chairman, Southwest Airlines. “Today’s announcement furthers our commitment to both cities as we add service to share Southwest’s value and Hospitality with more leisure and business travelers.”

Service to both airports is anticipated to begin in the first half of 2021. Additional details, including schedules and fares, will be available soon.

In its 50th year of service, Dallas-based Southwest Airlines Co. continues to differentiate itself from other air carriers with exemplary Customer Service to a Customer base topping 130 million passengers in 2019. Southwest became the nation’s largest domestic air carrier in 2003 and maintains that ranking based on the U.S. Department of Transportation’s most recent reporting of domestic originating passengers boarded. In peak travel seasons during 2019, Southwest operated more than 4,000 weekday departures among a network of 101 destinations in the United States and 10 additional countries. In early 2020, the carrier added service to Hilo, Hawaii, and Cozumel, Mexico. Southwest will begin service to Palm Springs, California and Miami on Nov. 15, as well as two new seasonal destinations in Colorado, Steamboat Springs and Montrose (Telluride) on Dec. 19, 2020.

The carrier issued its Southwest® Promise in May 2020 to highlight new and round-the-clock efforts to support its Customers and Employees wellbeing and comfort. Among the changes are enhanced cleaning efforts at airports and onboard aircraft, face covering requirements for Customers and Employees, and capping the number of passengers on every flight to allow middle seats to remain open through Nov. 30, 2020. Additional details about the Southwest Promise are available at Southwest.com/Promise.