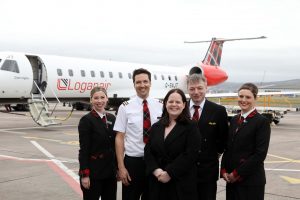 BELFAST, Northern Ireland, 2020-Mar-17 — /Travel PR News/ — The first in a series of daily flights to Aberdeen has taken off from Belfast City Airport with Loganair.

This is the first of two routes Loganair announced it would fill following Flybe’s collapse into administration.

The Scottish airline’s route to Inverness from Belfast City Airport will commence on 23rd March.

“Demand for connectivity between Northern Ireland and Scotland remains high which is why we are extremely pleased to reintroduce a daily service to Aberdeen with Loganair.

“Thanks to the swift response by Loganair, business and leisure passengers alike will continue to enjoy the convenience and ease that a direct flight to Aberdeen provides.”

Today’s inaugural service was operated on a Saab 340 aircraft, the same model that is used on Loganair’s popular Belfast City to Carlisle Lake District route.

The airline will also commence its four-times weekly flights to Dundee on 2nd April.

For more information and to book flights from Belfast City Airport, visit www.loganair.co.uk