Baku, Azerbaijan, 2013-11-6 — /travelprnews.com/ — Sam Ioannidis has been appointed General Manager of Four Seasons Hotel Baku, and it wasn’t long after he arrived that he felt right at home.

“Having spent most of my career in the US and Canada, I was very excited to come to Baku and experience its unique mix of cultures,” says Ioannidis, whose most recent appointment was as Hotel Manager of Four SeasonsHotel New York.  “What I found was a warm and inviting city.  I am particularly pleased with the staff ofFour Seasons Hotel Baku, who have done such a great job of putting the Hotel and the city on the world map since opening a year ago.”

For some months the family of Four Seasons Hotel Baku had been getting ready to greet their new General Manager, and on October 14 he finally arrived.

Not long after, on October 24, the team at Four Seasons Hotel Baku invited its top clients and members of the press a very special event – the introduction of Sam Ioannidis as the Hotel’s new General Manager.

It was a cocktail reception, where guests enjoyed live music by and Italian pianist and singer Federico Spagnoli, along with delicious refreshments including  seafood, cheese plates, Italian risotto with mushrooms, desserts and cocktails.

“Baku is not a very big city and therefore most people already know each other here, which is perhaps the reason why the atmosphere was more than warm and friendly,” observed Ioannidis. Guests started to arrive at 7:00 pm and were soon greeting each other, tasting the food, having conversations and just enjoying their evening.

After Ioannidis took the stage to offer greetings and introduce himself with a small speech, the party no longer felt like it was an introduction event, but just a cozy gathering with old and well-known friends, who all left with a small surprise –  beautiful macaroons prepared by the Hotel’s pastry team and presented in little gift boxes. 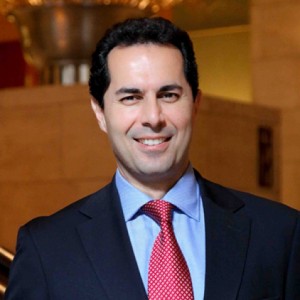