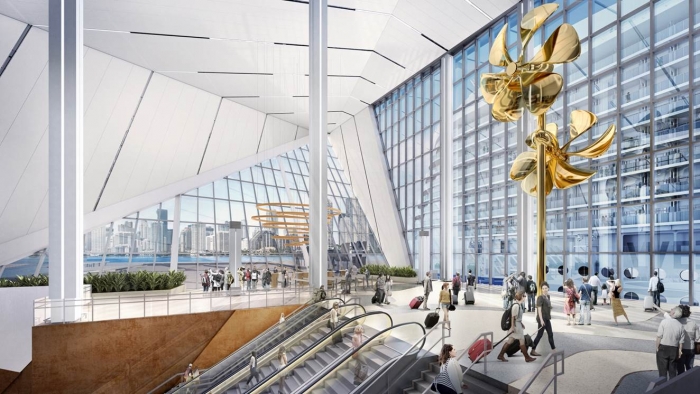 Miami, Florida, 2017-Mar-12 — /Travel PR News/ — Royal Caribbean Cruises Ltd. (NYSE: RCL) together with Miami-Dade County, today broke ground for the new cutting edge cruise Terminal A at PortMiami. Terminal A will be a striking addition to PortMiami, serving as homeport to several Royal Caribbean International ships, including two of the world’s largest and most innovative cruise ships – Allure of the Seas and the newly announced Symphony of the Seas.

“This is an exciting collaboration with Miami-Dade County and PortMiami to create not just another cruise terminal but an iconic state-of-the-art facility,” said Richard D. Fain, chairman and CEO for Royal Caribbean Cruises Ltd. “Terminal A reinforces our unwavering commitment to our hometown, the city where our company first started nearly 50 years ago.”

“Miami-Dade County is happy to welcome Royal Caribbean’s Terminal A, and the economic factors that will benefit Miami-Dade,” said Carlos Gimenez, Miami-Dade County Mayor. “Our public-private partnership will have an estimated economic impact of $500 million and generate more than 4,000 jobs. This will make PortMiami Royal Caribbean’s largest cruise port in the U.S., solidifying PortMiami’s status as the ‘Cruise Capital of the World.’”

Royal Caribbean Cruises Ltd. (NYSE: RCL) is a global cruise vacation company that owns and operates three global brands: Royal Caribbean International, Celebrity Cruises and Azamara Club Cruises. RCL is a 50 percent joint venture owner of the German brand TUI Cruises, and have a 49 percent interest in the Spanish brand Pullmantur and a minority interest in SkySea Cruises. Together, these brands operate a combined total of 49 ships with an additional thirteen on order. They operate diverse itineraries around the world that call on approximately 535 destinations on all seven continents. Additional information can be found on www.rclcorporate.com.

PortMiami is among America’s busiest ports and recognized across the globe as the Cruise Capital of the World and Global Gateway. PortMiami contributes more than $27 billion annually to the South Florida economy and helps generate 207,000 direct, indirect, and induced jobs. For more information please visit www.portmiami.biz.

If you are a member of the media and want to contact Royal Caribbean International with a media inquiry, please contact: