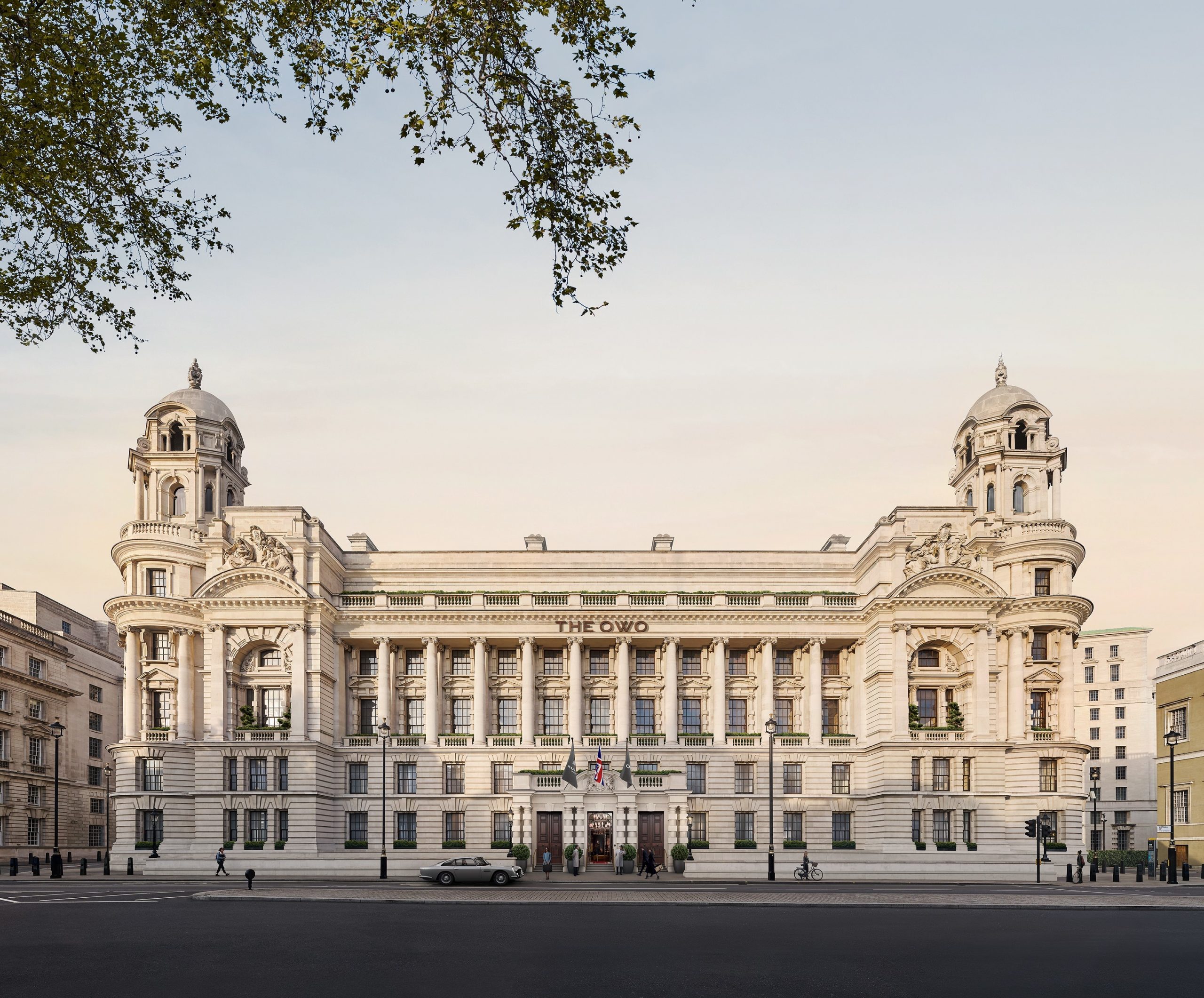 Churchill’s Old War Office to be serviced by Raffles with flagship hotel and branded residences, restaurants and spa

LONDON, UK, 2020-Feb-26 — /Travel PR News/ — The Hinduja Group and Obrascon Huarte Lain Desarollos (OHLD) announced an extension to its partnership with Raffles Hotels & Resorts. An agreement was signed in June 2017 for Raffles to operate a 125-room and suites flagship hotel at the iconic Old War Office building in London.  A further agreement has now been signed confirming Raffles as operator for the 85 residences at this landmark destination on Whitehall.

Along with the signing of Raffles, The Hinduja Group and OHLD officially unveiled the new name for the project, ‘The OWO’, at a topping out ceremony marking a significant milestone towards the project’s opening early 2022. The new name is distinctive whilst celebrating and respecting the history and spirit of the Old War Office.

Its transformative journey began in 2017 when The Hinduja Group and OHLD announced plans to restore and redevelop the iconic building into a new destination of 760,000 square feet comprising  125-room and suite Raffles hotel, 85 private residences, nine restaurants and bars, a destination spa and boutique retail.

With its transformation now well underway, the topping out ceremony is an important moment for the project as it marks reaching the highest point in the building.

Gopichand P Hinduja, the Hinduja Group’s Co-Chairman, said: “This is an exciting and momentous day for the Old War Office as we reach the highest point of the building and announce the official name of the project as ‘The OWO’. After an exhaustive process, Raffles were selected above other leading global hotel brands as our partner to deliver a world-class hotel experience of peace and warmth. We are delighted to announce Raffles as operators of the branded residences; the first of their kind in Europe. The level of servicing Raffles will offer to future residence owners is unparalleled and will set a new benchmark in London.”

OHL’s Chief Executive Officer, Mr Jose Antonio Fernandez Gallar added: “The Old War Office has been an ambitious and technically complex architectural and engineering project, and we are delighted to achieve this significant milestone as we progress towards the project’s opening early 2022.“

Sébastien Bazin, Chairman and Chief Executive Officer of Accor, said: “Raffles is a beloved brand with British roots, named after the British statesman and founder of Singapore, Sir Thomas Stamford Raffles, so it is very fitting that Raffles is coming home to London and that this will be our first residential project in Europe.  It is an enormous privilege to be partnering with the Hinduja family and OHLD. We are thrilled to take part in this adventure and to add “The OWO” to our Raffles collection, as this sublime location will undoubtedly make the list of the five most beautiful hotels in the world, alongside Raffles Singapore.”

The OWO project is being developed by the Hinduja Group and its joint venture partner OHLD through their Special Purpose Vehicles.  Mr Madani Sow, previously CEO and UK Chairman for Bouygues Construction, has been appointed as Chief Executive Officer to oversee the development management of the project. The project has been designed by UK-based EPR Architects, with the hotel interiors designed by New York-based designer Thierry Despont, and the residences designed by 1508 London.  The principal contractor is Ardmore Group, with Toureen Group completing the structural works, and structural engineers are Elliott Wood.

Raffles Hotels & Resorts boasts an illustrious history and some of the most prestigious hotel addresses worldwide. In 1887, Raffles Singapore set the standard for luxury hospitality, introducing the world to private butlers, the Singapore Sling and its enduring, legendary service.  Today, Raffles continues this tradition in leading cities and lavish resort locales, enchanting travellers with meaningful experiences and service that is both gracious and intuitive. Connoisseurs of life choose Raffles, not merely for its aura of culture, beauty and gentility, but for the extraordinary way they feel when in residence with Raffles. Each Raffles, be it Paris, Istanbul, Warsaw, Jakarta or the Seychelles, serves as a venerated oasis where travellers arrive as guests, leave as friends and return as family. Raffles is part of Accor, a world-leading augmented hospitality group offering unique experiences in 5,000 hotels and residences across 110 countries.  raffles.com

OHLD is the fully-owned development subsidiary of the OHL Group, one of the largest Spanish construction groups, focused on the development of large and high-end hospitality and real estate mixed-use projects. Its track record includes the development of both urban and vacational projects, including the world renowned resort Mayakoba, in the Mexican Riviera Maya, where it has developed four hotels: Fairmont, Rosewood, Banyan Tree and Hyatt Andaz, as well as the PGA Tour golf course El Camaleón; OHLD’s most recent project is the mixed use Canalejas in Madrid which includes the city’s first Four Seasons Hotel and private residences, launching mid-2020. ohldesarrollos.com/en/