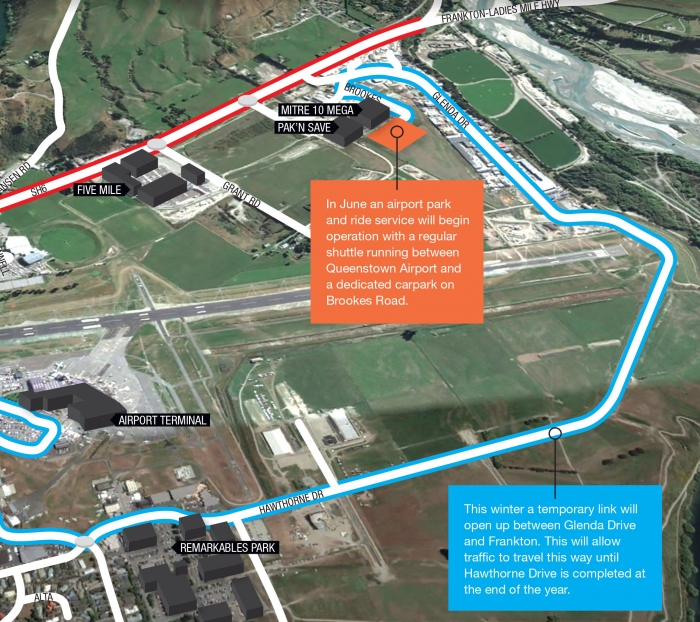 Queenstown, New Zealand, 2017-May-31 — /Travel PR News/ —Queenstown Airport today (29 May 2017) announced the shuttle operator, timetable and special launch pricing for its new 150-space Park and Ride offering which is due to open at the end of June.

Following a tender process, Go Bus, one of New Zealand’s leading passenger transport businesses, has been confirmed as the shuttle operator for the 12-month trial which is aimed at people parking longer term for two or more days.

The 11-seater shuttle, plus luggage trailer, will initially run on the hour and half hour and co-ordinate with the airlines’ timetables between the Park and Ride car park located in Brookes Road (behind Mitre 10 Mega and Pak‘n’Save) and the airport terminal.

The service operates on a ‘pay-to-park, free-to-ride’ model where people choose any available spot in the Park and Ride area and collect a receipt at the paystation which is used for the outbound and return shuttle trip to and from the airport.

Queenstown Airport is offering special launch pricing from the opening date until 31 August 2017. The special offer represents a discount on the normal pricing and will be $20.50 for two days and $8.50 per day thereafter, with a weekly maximum of $59.50.

Information about the shuttle timetable and a full list of the introductory pricing is now available on the Queenstown Airport website at http://www.queenstownairport.co.nz/carparking.

Queenstown Airport Chief Executive Colin Keel said that with 150 extra car parking spaces being made available, Park and Ride will significantly increase the airport’s car parking offering and provide a safe, affordable and efficient service for locals and visitors.

“We’ve invested heavily in car parking infrastructure over the past year to ensure we offer locals and visitors the best choice we can when they’re looking to fly from Queenstown Airport,” he said.

“The new Park and Ride offering will be primarily aimed at our local and regional communities as a lower cost option to parking at the terminal building for stays of two or more days. The launch coincides with other transport changes being implemented including new parking restrictions in Frankton and the removal of cars from SH6.”

“Over the course of the 12-month trial we’ll be closely monitoring customer usage and satisfaction levels. Based on customer feedback we’ll make relevant changes to the service to meet demand if necessary,” said Mr Keel.

The airport has been working with Queenstown Lakes District Council (QLDC) to coordinate the launch of the Park and Ride trial with the opening of Stage 1 of the Hawthorne Drive link between Glenda Drive and Remarkables Park which is due to open on June 22.

In terms of addressing wider transport, parking and road infrastructure issues, the airport has been working closely with the Queenstown Lakes District Council, NZ Transport Agency and Otago Regional Council as a member of the region’s transport governance group.

“It’s been great to see these organisations actively working together to deliver a number of key initiatives to improve transport and road infrastructure across the district,” said Mr Keel.

“Park and Ride is just one of the improvements we’re making to the airport’s parking and transport offering over the coming months as we strive to offer more choice to our customers.

“We’ve sought extensive feedback from a broad cross section of customers and the wider community and, based on the results, over the next 12 to 24 months we’ll be rolling out new technology and products and more parking infrastructure improvements,” he said.