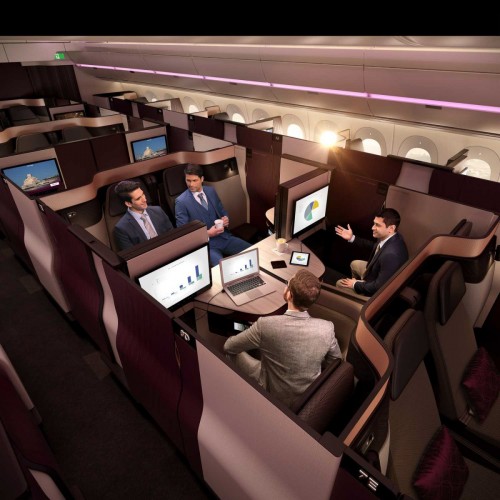 Qatar Airways’ Business Class experience, Qsuite, will launch on flights to and from Manchester

Manchester, UK, 2020-Jan-17 — /Travel PR News/ — Qatar Airways is pleased to announce that its award-winning Business Class experience, Qsuite, will launch on flights to and from Manchester in February. Qsuite is due to launch on the QR027/28 service from 14 February and then added to the QR021/022 service from 1 March.

The announcement comes just six months after Qatar Airways increased its flight frequency from Manchester Airport to three flights a day, demonstrating the airline’s confidence in and commitment to the UK market. Qsuite will operate on two of the three services by March 1.

Patented by Qatar Airways, Qsuite features the industry’s first-ever double bed available in Business Class, as well as private cabins for up to four people with privacy panels that stow away, allowing passengers in adjoining seats to create their own private room, a first of its kind in the industry. Adjustable panels and movable TV monitors on the centre four seats allow colleagues, friends or families travelling together to transform their space into a private suite, allowing them to work, dine and socialise together.

Qatar Airways Group Chief Executive, His Excellency Mr. Akbar Al Baker, said: “Since launching in 2017, Qsuite has received a host of accolades – most recently ‘World’s Best Business Class’ in the Skytrax World Airline Awards 2019 – and a hugely positive response from our customers.

“As such, we are delighted to introduce the product our Manchester route. With Qsuite, we have redefined business and luxury travel and we are thrilled to offer our loyal customers this unique product, which is unlike anything they would have experience before.”

Stephen Turner, Commercial Director at Manchester Airport, said: “It is fantastic to see this innovative and award-winning product become available to passengers travelling with Qatar Airways from Manchester.

“We are sure that it will prove immensely popular and will improve the experience for those travelling in Business Class.”

A multiple winning airline, Qatar Airways’ Qsuite won “Best Business Class Seat” in the 2019 World Airline Awards, managed by the international air transport rating organisation Skytrax. It was also named “World’s Best Airline,” “World’s Best Business Class” and “Best Airline in the Middle East.” It is the only airline to have been awarded the coveted “Skytrax Airline of the Year” title, which is recognised as the pinnacle of excellence in the airline industry, five times.