New Zealand’s nine great walks will become 10 in 2018 with the announcement of the Pike29 Memorial Track.

AUCKLAND, NEW ZEALAND, 2015-11-19 — /Travel PR News/ — The 45-kilometre walk is to be constructed through the Paparoa National Park on the west coast of New Zealand’s South Island. The national park will be extended by 3971 hectares to include the Pike River area as a memorial to the 29 men who perished in the 2010 mining disaster.

The track will travel from Blackball to Punakaiki and include part of the existing Croesus and Pororai River tracks.

Coastal Punakaiki, on the edge of the Tasman Sea, is a small settlement between the West Coast towns of Greymouth and Westport, and famed for the popular Pancake Rocks with its fascinating blowholes.

The new track will include two new 20-bed huts on the Moonlight Range and in the Pororari Valley, and will be open to walkers and mountain bikers.

“The Pike29 Memorial Track will be a stunning addition to New Zealand’s network of Great Walks. The scenery of the limestone gorges of the Pororari Valley combined with views of the Tasman Coast, the Pancake Rocks, and the Southern Alps from the Moonlight Range will make it a spectacular track,” Dr Smith said.

The new Pike29 Memorial Track will become New Zealand’s tenth Great Walk.  These are multi-day tracks renowned for outstanding scenery and built to the highest standards. The existing Great Walks network was established in 1993 and this is the first addition since. It is also the first Great Walk wholly on the West Coast.

The 3971-hectare extension to the Paparoa National Park includes the catchment of the Pike Stream from the top of the Paparoa Ranges and conservation areas used by the Pike River Mine company.

The Paparoa National Park is famous for the Punakaiki Pancake Rocks but there is much more to this west coast wilderness.

Limestone underlies most of the park, and is responsible for the area’s impressive landforms. Sculptured mountain ridges, mysterious river canyons, delicate cave decorations and the bizarre, pancake-like coastal formations will keep the camera busy. Maori travellers knew Punakaiki as a place for feasting (Punakaiki means ‘a spring of food’).

The park is the overlapping point between subtropical and cool climate forests. The iconic forms of nikau palms, northern rata and cabbage trees give the lowland rainforest a lush, Pacific feeling. Higher up, native beech forest merges with sub alpine shrubs. Higher still, daisies and gentians provide colour among the alpine tussocks. Some plants are unique to the area, suggesting that it was a botanic refuge during the ice ages.

Birdlife is prolific in the Paparoa National Park. The endemic Westland black petrel breeds only on the Punakaiki coast, and the great spotted kiwi combs the forest by night.

Punakaiki’s Pancake Rocks – on the edge of Paparoa National Park – are unique limestone formations dating back 30 million years. Lime-rich fragments of dead marine creatures on the seabed, overlaid by layers of mud and clay, were raised by earthquakes to form coastal cliffs. Sea, wind and rain have etched the cliffs into today’s unusual rock formations where, at high tide, blow holes explode sea water high into the air.

Blackball began life as a base for transitory gold seekers, but once coal mines opened in 1893 a small community began to develop.

For many years the mining town hummed along but by the sixties the roar of the coal trains had gone, the dredges had been sold for scrap and the mill and mines were quiet, as was the town.  Those who stayed behind witnessed an influx of “hippies” and holiday makers. This new wave allowed the community to continue on and today the small town is home to around 400 people.

The historic two-storey hotel in Blackball has had many changes of owner since it was built in the early 1900s. In the 1990s it was renamed the Blackball Hilton, but after protests from an overseas hotel chain this was changed to ‘Formerly the Blackball Hilton’. There is, in fact, good justification for the name as it is opposite Hilton Street, named after one of the directors of the Blackball Coal Company. Today the establishment still offers rooms and serves up some great food from the kitchen.

Blackball serves as the start or end point of the Pike29 Memorial Walk. 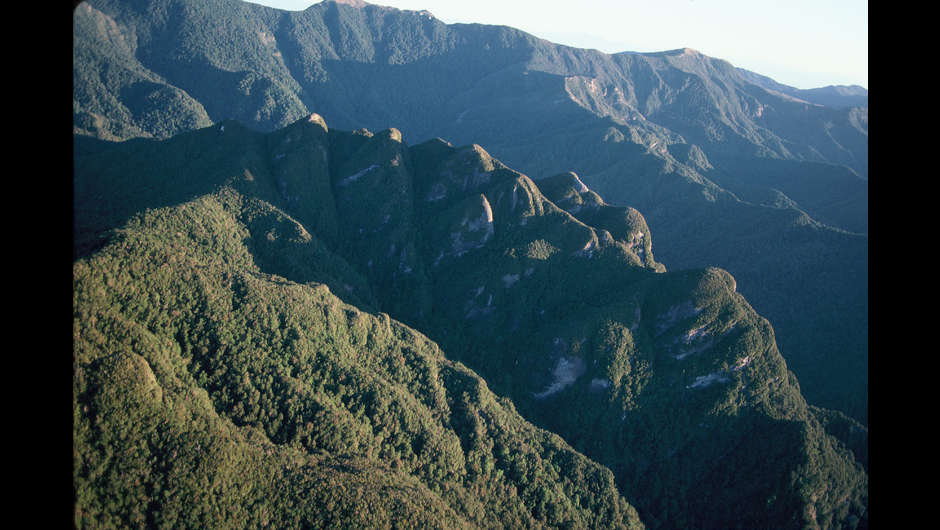 The lone hand rock formation can be seen from the Pike29 Memorial Track, the tenth Great Walk of New Zealand. CREDIT: Supplied