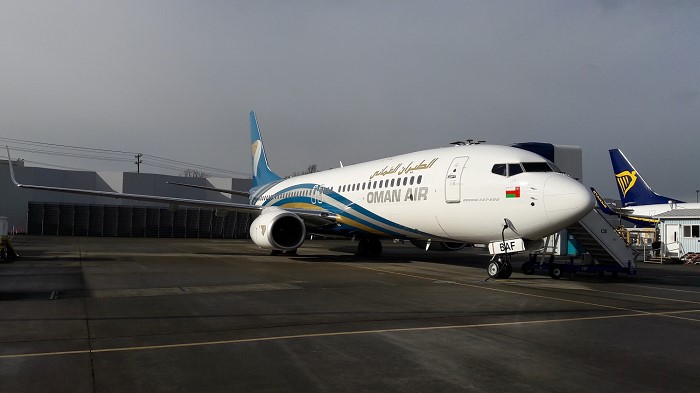 MUSCAT, Oman, 2017-Mar-16 — /Travel PR News/ — Oman Air, the national carrier of the Sultanate of Oman, is delighted to announce that a new Boeing B737-800 aircraft has joined its fleet as of 15 March 2017. This new aircraft will be used on short and medium haul routes and has a capacity of 162 seats, with 12 Business class seats of seat pitch 46 inches and 150 Economy class seats with seat pitch 30 inches. Each seat is equipped with an LCD screen, back-mounted 10.6 inches.

Oman Air has operated B737s for many years and the aircraft provide the backbone of the airline’s long and medium haul fleet, with 32 currently in operation. The new aircraft will be deployed soon on its arrival for commercial flights.

Abdulaziz Alraisi, Executive Vice President Products and Brand Development, said: “Oman Air is adding new aircraft to its fast growing fleet to keep up with the expansion programme. Known for its energy efficient systems, and combined with Oman Air’s superb maintenance staff and facilities, this is an ideal acquisition as we spread our wings to further afield.”

Oman Air is continuing with its ambitious expansion plans in 2017 with four new additions to the fleet already this year. The latest were the Boeing 787 Dreamliner which joined the fleet on 23 February 2017, beside the two new 737-800s added to the fleet in January and February. In addition, a new Dreamliner B787-9 will be joining Oman Air’s fleet in the coming April.

The delivery of new aircraft is part of Oman Air’s ambitious and dynamic programme of fleet and network expansion. The airline continues to be recognised for its award winning on board experience; winning an array of industry awards in 2016 to add to its growing collection. Oman Air’s latest aircraft addition consolidates its position in 2017 as the airline continues its progress to becoming a successful, sustainable company of the highest quality: “To Become the Best.”