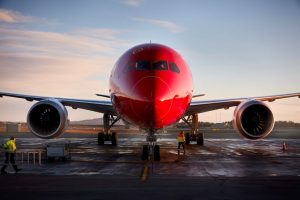 The airline has continuously grown its presence in NYC, where it currently offers eight nonstop routes from John F. Kennedy Airport to Europe: Amsterdam; Athens; Barcelona; London; Madrid; Oslo; Paris; and Rome. According to PANYNJ, after leading JFK’s international passenger traffic for two years in a row, Norwegian was the third-ranked contributor to growth with a net increase of 349,224 travellers and a 28.5 per cent jump.

“During a challenging and complex year, becoming the largest foreign airline in New York City is remarkable and a testament that our low-cost business model continues to appeal to modern travellers. With our focus on John F. Kennedy Airport, where we will soon be unveiling biometric boarding for greater efficiency and convenience, our presence will be further enhanced and improved in the forthcoming months. We will strive to solidify our lead in the New York region as we continue to offer our award-winning service to our customers,” said Matthew Wood, Senior Vice President of Commercial Long Haul and New Markets at Norwegian.

In eleven consecutive months in 2019, Norwegian continued to considerably increase its passenger numbers in-spite of route closures at Stewart International Airport due to the grounding of the Boeing 737 MAX aircraft; and route transfers from Newark Liberty Airport to John F. Kennedy Airport; as well as other issues facing the industry. Norwegian exceeded Air Canada in February and maintained its ranking as the eighth overall largest airline after U.S. carriers United, Delta, JetBlue Airways, American, Southwest Airlines, Spirit Airlines and Alaska Airlines, respectively. Air Canada is ranked ninth and British Airways as the tenth largest airline in terms of passengers carried.

With more than 40 nonstop routes to the US, Norwegian offers more routes from Europe than any other European airline. Norwegian is also the largest airline to Europe in the Bay Area, Los Angeles, and Florida.

In 2019, Norwegian partnered with climate company CHOOOSE to make it easy for customers to offset their carbon footprint when buying a ticket with the airline. CHOOOSE has developed a solution that seamlessly integrates into the customer check-out process, making it easy for customers to connect with the best CO2-reducing projects around the world. In addition to Norwegian, CHOOOSE enables a wide range of partners to integrate climate action directly into their products and services, and now has customers in over 70 countries.

Thanks to Norwegian’s young and more fuel-efficient fleet, 1.7 million metric tons of CO2 were saved in 2019 compared to the industry average. At the same time, 40 percent of the total CO2 emissions were offset through EU’s emissions trading system.