2012-12-27 — /travelprnews.com/ — Monarch, the leading scheduled leisure airline, has today announced its winter flying programme for 2013/14 from its newest base, Leeds Bradford Airport. The flights go on sale today.

An A320 aircraft will be based at the airport for winter 2013/14 and routes to Arrecife, Faro, Larnaca and Tenerife, which start for the 2013 summer season, will continue throughout the winter. These are in addition to the routes to the ski destinations of Grenoble and Munich which had their inaugural flights last week.

Kevin George, Managing Director at Monarch Airlines commented: “Our winter flying programme for 2013/14 goes on sale today and we are delighted to announce that we will have an A320 aircraft permanently based at Leeds Bradford Airport for the next winter season. This will enable us to operate a total of six routes to both winter sun and ski destinations. We expect to see great demand for our new routes and we are sure that our existing destinations will continue to flourish.”

“The basing of an aircraft for the winter season shows commitment by Monarch to the serve our growing region.”

For more information and to book, visit monarch.co.uk 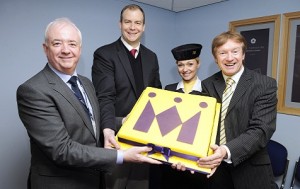