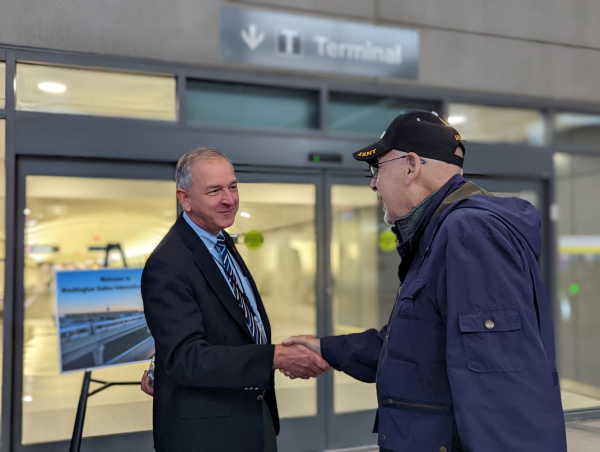 Washington DC, USA, 2022-Nov-17 — /Travel PR News/ — The Metropolitan Washington Airports Authority officially welcomed Metrorail to Dulles International Airport on Tuesday, marking the completion of a major two-phase Silver Line construction project to extend rail service to Dulles and 10 other stations in Fairfax and Loudoun counties in Northern Virginia. With the new service, airport passengers and employees now can take Metrorail directly to Dulles from downtown Washington and other points throughout the region.

“Today’s opening of the Silver Line is the culmination of one of the largest and most complex transportation infrastructure projects in the nation,” said Jack Potter, Airports Authority president and CEO, at a ribbon-cutting ceremony at Dulles Airport’s new Metro station. “Building rail to Dulles was part of the original vision for the airport more than 60 years ago. Bringing that vision to reality required talented teams of people working tirelessly toward a common goal. We are thankful for the strong partnerships with WMATA, Fairfax and Loudoun Counties, the federal government and everyone who contributed through the years to the success of this project. Together, we have much to celebrate with trains in service to Dulles Airport and beyond.”

The newly opened station at Dulles is connected to the main terminal by an indoor pedestrian tunnel with moving sidewalks. The walkway provides convenient access to the airport’s ticketing and baggage claim levels. New signs guide customers to the tunnel, which also links the terminal with Parking Garage 1. Passengers are advised to consult Metrorail’s website for station information, fares and operating hours.

“The Silver Line will make Dulles International Airport even more accessible to passengers and employees from Washington and around the region,” said Richard Golinowski, Airports Authority vice president and airport manager. “This represents a game-changing upgrade to the area’s transportation infrastructure and will facilitate major new economic growth.”

Washington Dulles International Airport and its 35 airline partners serve 135 non-stop destinations with service to 58 internationals cities. The nearly 300 daily flights connect the D.C. region to 41 other capitals include service launched in 2022 to Amman, Jordan; and Lomé, Togo; with service to Cape Town, South Africa, set to begin November 17. The airport’s largest carrier, United, has maintained a hub at Dulles for more than 35 years.

“As the largest operating airline in the region, United is not only proud to call Dulles International Airport a hub but also a critical global gateway between our nation’s capital and the rest of the world,” said Henry Bird, United’s managing director of airport operations at Dulles International Airport. “With today’s highly anticipated opening of the Dulles Silver Line Metrorail station, we are thrilled and ready more than ever to connect countless new travelers to Washington, D.C. and to the more than 100 destinations around the world that we serve nearly every day.”

The opening of the airport Metrorail station marks the end of service for the the airport’s Silver Line Express bus, which provided rides between Dulles and the Wiehle-Reston East Metrorail station. The bus will discontinue operations on November 16. Passengers who use other buses to access rail stations or the airport are advised to check directly with regional bus providers to learn about other adjustments related to the commencement of Silver Line service.

“With today’s opening of Phase 2 of the Silver Line, we now have both Dulles and Reagan National airports on the Metro system to better serve our passengers and employees and solidify our airports’ status as tops in the nation for accessibility by public transit,” Potter said. “The Silver Line is bringing enormous benefits to the region. It provides new access for commuters, shoppers, tourists and other travelers across the National Capital area. In addition to helping ease traffic congestion, it’s a catalyst for new jobs and economic development as well as a foundation for future growth. You can see this new economic development all around us. Just drive along the Dulles Toll Road or Access Highway and look at all the new office towers and other buildings, with even more under construction. The Airports Authority is proud to be part of this great success and the great regional partnership that made it happen.”