LOS ANGELES, 2013-05-13 — /travelprnews.com/ — Metrolink will celebrate Bike to Work Day on Thursday, May 16, by offering free train rides to Southern California commuters who bring their bicycles on board Metrolink trains.

Metrolink bicyclists can transfer for free to Metro Rail and buses (metro.net), as well as buses operated by 10 other transit agencies:

Metrolink bicyclists traveling to Orange County can take part in the Orange County Transportation Authority (OCTA)’s three-mile Bike Rally at 7:30 to 9:30 a.m. from the Metrolink Orange Station to the OCTA headquarters (octa.net).

“Metrolink is pleased to work with transit agencies across Southern California to support the bicycle community on Bike to Work Day,” said Metrolink CEO Michael DePallo. “It’s a great opportunity for us to promote driving alternatives and highlight the many regional connections available to commuters.”

Metrolink is committed to providing bicyclists with convenient, seamless travel options. The agency has a total of 17 Bike Cars, each of which can accommodate 18 bicycles compared to the other cars designed to hold three bicycles. Due to high demand for bicycle space, Metrolink is in the process of designing four additional Bike Cars that will hold nine bicycles each. The new cars will have only one set of bicycle racks instead of two so bicycle owners can sit next to the racks. Metrolink altered the design based on feedback from the bicycle community.

Metrolink introduced its Bike Cars in July 2011. The agency has carried more than 340,000 bicycles since January 2012.

ABOUT METROLINK (www.metrolinktrains.com)
Metrolink is Southern California’s regional commuter rail service in its 20th year of operation. The Southern California Regional Rail Authority (SCRRA), a joint powers authority made up of an 11-member board representing the transportation commissions of Los Angeles, Orange, Riverside, San Bernardino and Ventura counties, governs the service. Metrolink operates over seven routes through a six-county, 512 route-mile network. Metrolink is the third largest commuter rail agency in the United States based on directional route miles and the seventh largest based on annual ridership. 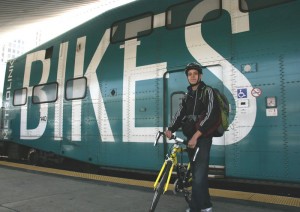