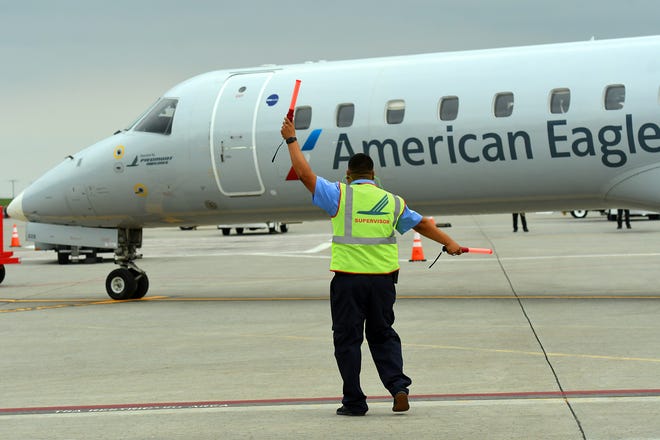 “The investments we have made over the years at ORH are paying dividends,” said Congressman Jim McGovern. “This is great news that American is bringing another flight to Worcester, offering the community a new destination and more travel opportunities beyond.”

“Governor Baker and I are pleased with the progress Worcester Regional Airport continues to make as it expands opportunities connecting Central Massachusetts to the global economy,” said Lt. Governor Karyn Polito. “Restarting this service to Philadelphia will provide residents with multiple flights, and hundreds of destinations.”

The first flight from Worcester will depart on November 2nd. Tickets will be available for sale on Monday, Aug 30th. This daily flight will use an Embraer ERJ-145 aircraft.

The daily flight will operate as follows:

“This is the third flight announcement we’ve had in a few months, and we are excited to welcome American back to Worcester,” said Worcester County Sheriff and Massport Board Chairman Lew Evangelidis. “Having more service to more destinations allows passengers to choose a flight that works best for them.”

“There are exciting things happening in Worcester and airlines are paying attention,” said Massport CEO Lisa Wieland. “American was a terrific partner prior to the pandemic, and we are pleased they are returning to Worcester Regional Airport, offering travelers a convenient flight to Philadelphia with connections throughout the world.”

This year, ORH celebrates its 75th anniversary. In May 1946, the airport formerly known as Worcester Municipal Airport was approved by the Massachusetts Aeronautics Commission to provide commercial air service. Over the years, the airport on top of Tatnuck Hill has transformed and grown. Since Massport took ownership of the airport in 2010, the Authority has invested more than $100 million in improvements, including in a Category III Instrument Landing System, completed in 2018. Two new jet bridges were installed in 2019, doubling the number to 4. And in 2020, Massport took advantage of the reduced passenger activity to resurface half of the airport’s primary runway and install energy-efficient LED runway signs using FAA funding. These investments will allow ORH to accommodate more flights and serve more passengers in the future.

“Having three major airlines competing for passengers at Worcester Regional Airport is a great sign that the city is truly on the map,” said Worcester Regional Chamber of Commerce President and CEO Timothy P. Murray. “These flights offer opportunity for the business community to make connections throughout the country and the world.”

“Travelers can get anywhere in the world from Worcester with these flights,” said Worcester Mayor Joseph M. Petty. “Thank you to Massport, Lieutenant Governor Polito and the entire team for continuing to promote Worcester.”

American’s purpose is to care for people on life’s journey. Shares of American Airlines Group Inc. trade on Nasdaq under the ticker symbol AAL and the company’s stock is included in the S&P 500. Learn more about what’s happening at American by visiting news.aa.com and connect with American on Twitter @AmericanAir and at Facebook.com/AmericanAirlines.