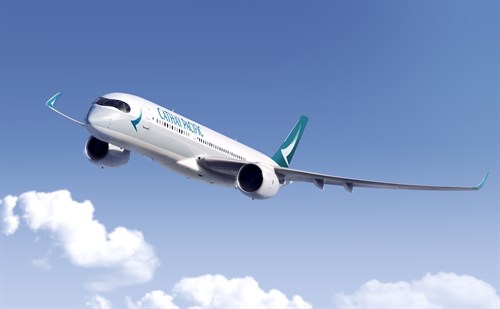 MANCHESTER, ENGLAND, 2017-Apr-10 — /Travel PR News/ — Cathay Pacific has announced that it will be bolstering its frequency in the North West by offering daily flights between Manchester and Hong Kong as of 1 December 2017. The extra services will operate on Sundays and Wednesdays.

Having announced at the end of last year that it would be increasing its current four-times-weekly schedule to five-times-weekly as of 2 June this year, Cathay Pacific is further increasing the frequency to a daily service to meet growing customer demand in the region.

Neil Glenn, Cathay Pacific General Manager for Europe, commented: “Our frequency increases are a direct result of responding to the needs of our customers.  Since we initially launched the route in December 2014, we’ve been delighted with how popular it has proved.

“The enhanced schedule will provide business and leisure travellers in the North West with more choice and greater flexibility in planning their trips for added convenience, while at the same time strengthening Hong Kong’s position as Asia’s leading aviation hub.  From there, the airline serves over 190 destinations via Hong Kong International Airport, including 22 destinations within mainland China.”

“This announcement underscores our commitment to not only the North West and the UK, but also to serving key long-haul markets around the globe. Furthermore, our codeshare agreement with Flybe enables our passengers to book domestic flights with Cathay Pacific from major regional destinations across the country – therefore increasing our reach within the UK even further.”

Stephen Turner, Commercial Director at Manchester Airport, said: “For Cathay Pacific to recently announce an increase to five flights per week was excellent news in itself, but for them now to go to a daily service from December clearly showcases the strong demand for the route.

“In just a few years the route is performing extremely positively and allows the 22M people in our catchment area easy, direct access to Hong Kong and beyond.

“It continues to unlock economic opportunities and trade between the two regions and I am sure the extra frequency will be welcomed by business and leisure passengers alike.”

Paul Stowers, deputy director, Department for International Trade (DIT) North West, added: “China and Hong Kong have become hugely significant markets for North West exporters. China is now consistently in our top five markets overseas whereas in the recent past it struggled to make the top 10.

“With the recent launch of direct flights between Manchester, China and Hong Kong and this very welcome increase in the frequency of flights by Cathay Pacific as the only airline flying directly to the former colony, these markets are more accessible than ever. President Xi Jinping’s visit in 2015 helped to enhance the channels for exporting and underlined the huge importance of the cultural and economic links between China and the North West.”

From June onwards, an A350-900 will replace the Boeing 777-300ER on all flights to Manchester, making it the second Cathay Pacific destination in the UK, after Gatwick, to receive the technologically-advanced aircraft.

Featuring the airline’s latest products in Business, Premium Economy and Economy Class, the new A350-900 encapsulates Cathay Pacific’s brand promise of a “Life Well Travelled”. In addition to the latest seats and an enhanced inflight entertainment system, the aircraft is Wi-Fi equipped, meaning passengers can stay connected throughout their journey.

Neil said: “Our additional Airbus A350-operated flights between Manchester and Hong Kong underline the deep-rooted commitment we have to providing both business and leisure passengers with increased convenience and superior in-flight products. This brand new aircraft gives travellers even more reasons to choose Cathay Pacific and enjoy a life truly well-travelled.

“Beyond offering passengers a brand new aircraft and increased frequency, there are plenty of other reasons to fly with the airline – not least that Cathay Pacific’s non-stop flight to Hong Kong takes just 12 hours.  We also offer the fastest flight between Manchester and the key Australian destination of Sydney, taking just 22:10 hours.”

The sale features a wide range of destinations including Australia, New Zealand Hong Kong, China, South and North Asia (including Indonesia, Malaysia, Cambodia, Thailand, Vietnam, South Korea, Japan and Taiwan) for selected dates up until March 2018, with some great fares available.  To book visit www.cathaypacific.co.uk.  The sale ends on 4 May 2017.

The flight schedule for Cathay Pacific’s Manchester (MAN) service will be as follows (all times local):

Details of the new additional services can also be found in the Flight Timetable under the Travel Information section at www.cathaypacific.co.uk

Cathay Pacific currently operates 43 non-stop flights from Hong Kong to the UK per week, including five daily services to Heathrow and four-times-weekly services to Gatwick and Manchester. By December 2017, the airline will have increased its frequency to 49 non-stop flights between the UK, with both Gatwick and Manchester moving to daily operations.