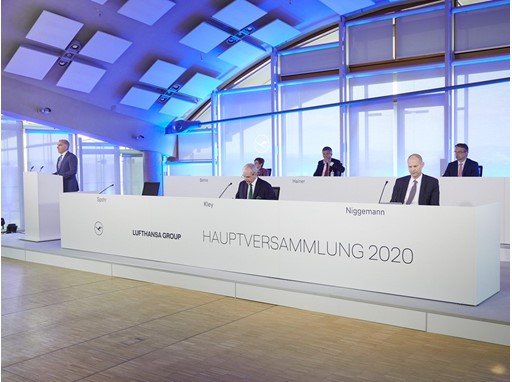 COLOGNE, Germany, 2020-May-08 — /Travel PR News/ — Some 10,000 shareholders followed today’s (05-MAY-2020) Annual General Meeting of Deutsche Lufthansa AG online, around ten times as many as last year attended the AGM in Bonn. A total of 33.19 per cent of the share capital was represented. By a large majority, they discharged the members of the Executive Board and the Supervisory Board from their responsibility for the conduct of business in 2019 by sizeable majorities.

The shareholders approved the proposal of the Board of Management and Supervisory Board to use the net retained profits for the 2019 financial year of 298 million euros in full to transfer them to other revenue reserves and not to distribute them as a dividend.

The change to the remuneration system for the Management Board with retroactive effect from 1 January 2020, as resolved by the Supervisory Board, was also accepted by the majority of shareholders.

The majority of shareholders also approved the new authorization to issue convertible bonds, bonds with warrants, profit participation rights and/or participating bonds (or combinations of these instruments). It replaces an authorization that expires in April 2021.

Finally, they approved a minor adjustment to Authorized Capital A and a corresponding amendment to the Articles of Association.

A total of nine agenda items were put to the vote at the Annual General Meeting. The company’s shareholders approved all items by a large majority.

Detailed information can be found under www.lufthansagroup.com/agm