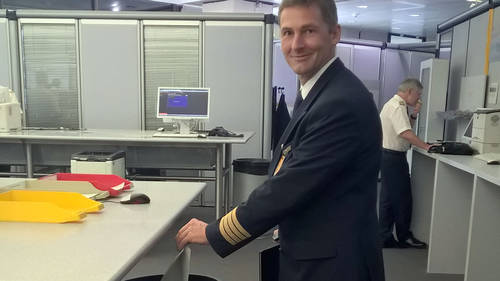 Will the revolutionary technology work in practice? A large-scale test should provide proof

Frankfurt, Germany, 2016-Aug-31 — /Travel PR News/ — On 1 August, the LH634 took off from Frankfurt on its way to Kuwait as the first Lufthansa flight without a paper briefing package. For the first time, the pilots are using only the eFF (Electronic Flight Folder) application for the entire briefing and flight documentation.

During the briefing in Frankfurt, Captain Andreas Ritter and his crew loaded the briefing package on their EFB (Electronic Flight Bag) tablets, implemented the briefing and ordered the necessary aviation fuel. Everything as usual – and yet completely different: as today they do not need the usually mandatory paper documentation. Their flight is part of a large-scale test run at Lufthansa. Gradually, the digital briefing packet will become the master documentation on five long-haul city-pair flights. Will this revolutionary technology prove itself in practice? This test should provide the evidence.

Once onboard, the briefing packet is transmitted to the EFBs installed in the airplane and used for the direct flight preparation in the cockpit. The pilots enter the flight data in the flight management system, the load sheet numbers and the route release are noted in the eFF.

In the air on the way to Kuwait, the crew documents all details electronically. The eFF application is an in-house development and was programmed in an agile environment within the framework of the eFlightOps project. Today, the application is precisely tailored to the established Lufthansa methods and systems. The app will continue to evolve, as Heiko Freytag who, together with Sonja Schellenberg, led the eFlightOps project, emphasizes: “We will incorporate the feedback from the pilots and work daily to improve it.”

After landing in Kuwait, the crew turns on the onboard UMTS router to establish a data connection, allowing the eFF to automatically load the briefing package for the onward flight to Doha. All the important information is thus ready and available on time for arrival at the gate. Once the final documentation of the flight is entered in the eFF, the crew transfers the briefing packet via router into the electronic archive. Here all the documents are kept, in accordance with regulations, for 90 days. During the experimental phase, the completeness and quality of the documentation in particular will be carefully scrutinised by the authorities.

No sooner has the “old” briefing package been archived, the crew seamlessly prepare for the onward flight to Doha with the new briefing package. The fact that the documents are so readily available will be of the highest importance for the introduction of paperless briefings on short-haul flights. Therefore, the station staff, parallel and as a backup, makes all data available on a USB flash drive.