London Gatwick Airport today reveals that we are a nation of slick shoppers and bargain hunters, most of us equipping ourselves with a list of excuses to justify any spending spree. Sales and bargains are enough to tempt almost half the nation (48%) while one in three Brits (30%) spend to cheer themselves up or as a reward for hard work.

The study of 2,000 people, commissioned to support the launch of Gatwick’s new Summer Retail Campaign, ‘Tempted before Take-off’, exposes the top ten most common excuses UK shoppers use to justify their spending habits:

The tipping point for shoppers feeling like they need an excuse is £82.80 on average, be it to themselves (69%), their partners (42%), friends (15%) and parents (14%). Five per cent have also found the need to justify shopping to work colleagues. And it’s not just the ladies that have excuses up their sleeves, 68% of men also admit to wheeling out the excuses.

Spencer Sheen, Head of Retail at Gatwick Airport says: “Being tempted to shop is clearly something people feel the need to justify but if the purchase and price is right, we shouldn’t have to make excuses. That’s why, with up to 20% off high street prices on almost everything at the airport, it’s not surprising so many plan to spend before they take off.

“At Gatwick we’ve invested millions in improving the shopping and eating experience to ensure every passenger can quickly and easily find what they need and want, at the best possible price. People can delight in finding luxury designer bargains alongside high street favourites all under one roof which is complimented by our ‘Shop, Fly, Collect’ service, so passengers can make the most of the bargains available without lugging extra bags on holiday. We also have lots of tempting, award-winning restaurants to hand giving passengers the chance to recharge their batteries before catching their flight.”

Shoppers revealed they often hide their spoils from family and friends with almost a quarter (23%) most likely to stowaway their bags in the bedroom.

Other hideaways were the bottom of the wardrobe (10%) and under the bed (5%) while an inventive 2% said they stored it in the bin wrapped in packaging to avoid detection.

However, no matter what the reasoning, almost half (48%) of shoppers admitted that spending makes them happier and 22% said it gave them a real buzz. A quarter (25%) also claimed shopping offered the perfect chance for precious time for themselves, rising to 30% amongst women.

You may also be interested in:  London Gatwick Airport unveils new innovative and more sustainable plan in resurfacing its main runway

As summer holiday fever takes hold, over half (52%) of people save spending for the airport. Of those, almost a fifth (19%) plan to pick up perfume, more than one in ten (14%) plan to buy clothing and accessories while 29% are looking forward to enjoying a meal or drinks with friends pre-flight.

A fifth (21%) shop at the airport to take advantage of VAT-free bargains, 22% find it the best use of their pre-flight waiting time and 26% simply see it as key part of the overall airport experience. The shopping has been so good in some cases that it’s caused passengers (8%) to end up running for their flight.

In order to help passengers organise their time spent in the airport, Gatwick has launched a new service, ‘Reserve and Collect’ meaning passengers can now treat themselves before they reach the departures lounge. The free, easy to use service allows passengers to start shopping earlier by reserving shopping online or over the phone and collecting before take-off. The service, available through selected Gatwick retailers, means that shoppers can still benefit from huge savings compared to high street prices, and after check-in can enjoy the airport at a leisurely pace.

The study follows a busy year for Gatwick, as the airport has invested £40 million in improving facilities and opening more than 20 new and refreshed stores including a brand new Zara, Aspinal of London, and Mango stores, as well as a 6,000 sq ft Harrods.

For more information on what’s in store for passengers at Gatwick, visit:http://gatwickairport.com/tempted/ and follow the conversation at #temptedbeforetakeoff

You may also be interested in:  London City Airport announces £12m investment to upgrade its departures area

The research was conducted by ICM and commissioned by Gatwick Airport with fieldwork conducted in June 2014. Data was secured via an online survey, and the UK sample consisted of 2,000 UK consumers, aged 18 and above.

About London Gatwick
Gatwick Airport is the UK’s second largest airport and the busiest single-runway airport in the world. It serves more than 200 destinations in 90 countries for around 36 million passengers a year on short and long-haul services. It is also a major economic driver for the South-East region, generating around 23,000 on-airport jobs and a further 13,000 jobs through related activities. The airport is 28 miles south of London with excellent public transport links, including the Gatwick Express. Gatwick Airport is owned by a group of international investment funds, of which Global Infrastructure Partners is the largest shareholder. Follow us on Twitter at www.twitter.com/Gatwick_Airport 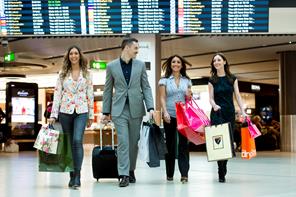