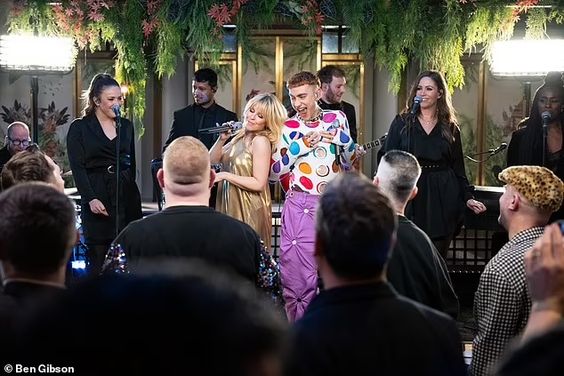 London, UK, 2021-Dec-08 — /Travel PR News/ — Pop sensation and “It’s a Sin” star, Olly Alexander, performed for 50 guests at a secret concert in the heart of Central London for the first-ever Secret Socials with Hilton event, which was held at The Trafalgar St. James, Curio Collection by Hilton.

The Years & Years singer took to the stage to give guests a night to remember, with live renditions of hits including King, Desire, and new single Sweet Talker.

During a performance of A Second to Midnight, the audience were treated to the ultimate surprise, as Kylie Minogue surprised fans and joined Olly live on stage.

After performing, Olly Alexander shared: “I had so much fun performing at Hilton’s first Secret Socials event and reconnecting with my fans in a cute intimate setting. No one knew they’d be at a Years & Years show and I loved seeing their shocked faces.  Plus I got to hang and perform with my bestie, queen Kylie.”

Kylie Minogue added: “Surprising everyone on stage was so much fun — we’ve been planning it for a while, and it’s been so hard to not tell anyone! The venue was perfect for such an intimate gig and I loved the opportunity to connect up close and personal with fans.  It’s rare to share these moments and it was all the sweeter with the beautiful Olly Alexander.  It was definitely a night to remember!”

One lucky fan, Kate Green, attended the gig, sharing: “I am such a big Kylie fan and could not believe it when she walked on the stage to perform with Olly — I turned to my friend and our jaws dropped! I was truly blown away — it was amazing to be so close to such big stars!”

Gurmej Bahia, marketing and loyalty vice president, EMEA, said: “We know our customers are eager to reconnect with the people and places they love, and we are absolutely thrilled that Kylie and Olly gave everyone an unforgettable night at our first Secret Socials with Hilton event. It’s these memories that we can look back on for a lifetime and we look forward to giving Hilton Honors members, guests and music fans access to even more special experiences.”

As Years & Years, Olly Alexander has become one of the world’s most trailblazing modern pop stars. Across two hugely successful albums to date, the singer, actor, fashion icon and cultural vanguard has earned 5 Brit  Award nominations, surpassed  4.4 billion global streams, and played triumphant shows ranging from Glastonbury’s Pyramid Stage to The O2 Arena.. Along the way, Olly has also become a fearless, once-in-a-generation voice on important discussions around  mental health, and issues affecting the  LGBTQ+ community.

2021 has been a stand-out year for Olly Alexander, which started with the leading role as Ritchie Tozer in the critically acclaimed Russell T Davies TV drama It’s A Sin. The show went on to become one of Channel 4’s biggest shows, breaking viewing on demand records and winning the Best New Drama prize at the National Television Awards as well as bringing the fight against HIV/AIDs back into the public conversation like never before. As a result, this led to a spectacular show-stopping performance of Pet Shop Boy’s classic ‘It’s A Sin’ with Elton John at the BRIT Awards 2021 with the single released to benefit the Elton John Aids Foundation.

Years & Years have over 3.4 million worldwide album sales to date and will be adding to that figure with forthcoming release Night Call on January 7th 2022 with a UK arena tour in support of the release coming later in the year. To round out an incredible 2021, Olly Alexander will be hosting his own huge NYE show – The Big New Years & Years Eve Party – on BBC One.

In 2020 Kylie released her eighth UK No.1 album ‘DISCO’, which saw her make chart history once more as the first female artist to have a UK No.1 album in five consecutive decades.

Kylie’s record-breaking fifteenth studio album ‘DISCO’ was released to widespread acclaim last year and was hailed as ‘an irresistible tonic to real life. Thank God for Kylie Minogue’ by Metro in a 5* review and ‘the ultimate rescue remedy’ by The Observer (4*). It featured lead singles ‘Say Something’, which received widespread praise – deemed ‘a galactic slice of pop music heaven’ by i-D – and ‘Magic’, which NME called ‘an exuberant, horn-fuelled romp.’

Hilton Honors is the award-winning guest loyalty program for Hilton’s 18 world-class brands comprising more than 6,700 properties in 122 countries and territories. Hilton Honors members who book directly through preferred Hilton channels have access to instant benefits, including a flexible payment slider that allows members to choose nearly any combination of Points and money to book a stay, an exclusive member discount and free standard Wi-Fi. Members also have access to contactless technology exclusively through the industry-leading Hilton Honors app, where members can check in, choose their room and access their room using Digital Key. Hilton Honors offers its nearly 123 million members hundreds of ways to earn and redeem Points, including with select co-branded credit cards. Members can redeem Points for free nights, purchases on Amazon, exclusive experiences, charitable contributions and more. The program is free to join and travelers can enroll online at hiltonhonors.com. Learn more about Hilton Honors at newsroom.hilton.com/hiltonhonors, and follow Hilton Honors on Facebook, Twitter and Instagram.

Hilton (NYSE: HLT) is a leading global hospitality company with a portfolio of 18 world-class brands comprising more than 6,700 properties and more than 1 million rooms, in 122 countries and territories. Dedicated to fulfilling its founding vision to fill the earth with the light and warmth of hospitality, Hilton has welcomed more than 3 billion guests in its more than 100-year history, earned a top spot on the 2021 World’s Best Workplaces list, and been recognized as a global leader on the Dow Jones Sustainability Indices for five consecutive years. In 2020, Hilton CleanStay was introduced, bringing an industry-defining standard of cleanliness to hotels worldwide. Through the award-winning guest loyalty program Hilton Honors, the nearly 123 million members who book directly with Hilton can earn Points for hotel stays and experiences money can’t buy. With the free Hilton Honors app, guests can book their stay, select their room, check in, unlock their door with a Digital Key and check out, all from their smartphone. Visit newsroom.hilton.com for more information, and connect with Hilton on Facebook, Twitter, LinkedIn, Instagram and YouTube.