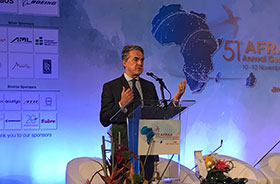 IATA called on African Aviation to prioritize Safety, Cost-competitiveness, Opening the continent to travel and trade, and Gender diversity

The four priorities are:

“Across the African continent, the promise and potential of aviation is rich. Already it supports USD 55.8 billion in economic activity and 6.2 million jobs. And, as demand more than doubles over the next two decades, the critical role that aviation plays in Africa’s economic and social development will grow in equal proportion. With the right tax and regulatory framework, the opportunities aviation creates to improve people’s lives are tremendous,” said Alexandre de Juniac, IATA’s Director General and CEO in a keynote speech at the 51st Annual General Assembly of the African Airline Association (AFRAA) in Mauritius.

“Our top priority is always safety. And we must never forget that global standards have helped to make aviation the safest form of long-distance transport. There is a good example of that in the safety performance of African airlines. The continent had no fatal jet accidents in 2016, 2017 and 2018. That is largely due to the coordinated efforts of all stakeholders with a focus on global standards, guided by the Abuja Declaration. But there is still more work to do. Taking these three steps will raise the safety bar even higher,” said de Juniac.

IATA highlighted the need for a cost-competitive operating environment for airlines in Africa.

“African carriers lose $1.54 for every passenger they carry. High costs contribute to these losses Flying is not a luxury—it is an economic lifeline for this continent. That’s why it is critical for governments to understand that every extra cost they add to the industry reduces aviation’s effectiveness as a catalyst for development,” said de Juniac.

IATA called on African governments to:

IATA also called on governments to follow treaty obligations and ensure the efficient repatriation of airline revenues at fair exchange rates. Currently funds are blocked in 19 African states. “It is not sustainable to expect airlines to provide vital connectivity without reliable access to their revenues,” said de Juniac.

Opening the continent to travel and trade

IATA called on governments to liberalize intra-Africa access to markets and urgently implement three key agreements which have the potential to transform the continent. These are:

“My message to governments on this triumvirate of agreements is simple—hurry-up! We know the contributions that connectivity will make to the UN SDGs. Why wait any longer to give airlines the freedom to do business and Africans the freedom to explore their own continent,” said de Juniac.

IATA also called for the industry to do more to improve its gender diversity and for airlines in the region to support the recently launched 25by2025 campaign.

The 25by2025 campaign is a voluntary program for airlines to commit to increasing female participation at senior levels to at least 25% or to improve it by 25% by the year 2025. The choice of target helps airlines at any point on the diversity journey to participate meaningfully.

“It is no secret that women are under-represented in some technical professions as well as in senior management at airlines. It is also well-known that we are a growing industry that needs a big pool of skilled talent. Africa can be proud of its leadership in this area. But we need to do more. The 25by2025 initiative will help move our industry in the right direction,” said de Juniac.