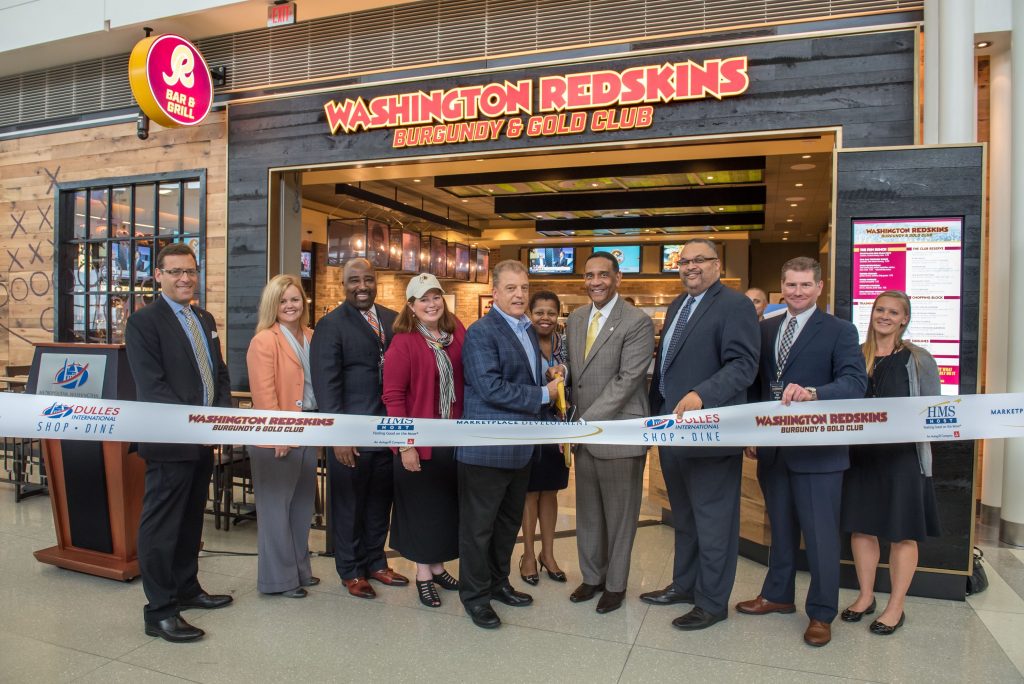 “The Burgundy & Gold Club is the perfect stop for traveling fans and HMSHost is thrilled to spotlight Washingtonians’ hometown team along with great food and drinks to travelers from around the world,” said HMSHost Vice President of Business Development Bryan Loden. “HMSHost is honored to build a winning team with the Washington Redskins, the Metropolitan Washington Airports Authority, Morgan Group Ventures, and MarketPlace Development to offer travelers this unique dining experience right inside the concourse.”

From helmets and cleats to bobbleheads, replica Lombardi trophies, and autographed jerseys from the team’s greatest players, memorabilia and photos from the five-time World Champions are on full-display throughout the restaurant. A large video wall showcases the team’s history and illuminated transparent mesh images hang from the ceiling and feature the team’s legendary players inducted into the Pro Football Hall of Fame.

Terry Bateman, Washington Redskins CMO, said: “We are thrilled to be working alongside of MWAA with our partner HMSHost to bring the Washington Redskins Burgundy and Gold Club to one of the great airports of this region, Dulles Airport. There is no better way to celebrate our 85th season than by creating a place to experience Redskins football 365 days a year. Hail to the Redskins!”

Traveling fans are never far from the gridiron action with large televisions throughout the restaurant. Guests can enjoy the games while relaxing with a drink from a broad selection of local beers, wine, and crafty cocktails such as the aptly named Team Captain and The Ginger Snapback.

“The Washington Redskins, one of the best known NFL brands in the world, now has a themed restaurant at Dulles International that will connect passengers to this long-standing football dynasty,” said Jerome L. Davis, Metropolitan Washington Airports Authority Executive Vice President and Chief Revenue Officer. “The collaboration between the Airports Authority, Marketplace and HMSHost brought the Burgundy and Gold Club to fruition, providing a sense of place, local flavor and a fun experience for passengers traveling through the airport.”

On the menu line-up, travelers will find an array of all-day crowd pleasing dining options. The restaurant features appetizers that are a nod to game-day favorites like the Old Bay Grilled Chicken Wings, the Kaplan & Zubin Fried Pickles, and Corndog Puppies.

Enjoy other favorites such as the Maryland Crab Cake Salad and The Hoggs Pit BBQ. The chef-driven menu features local suppliers whenever possible, including Logan’s Chicken Sausage from Washington area Logan Sausage Company, as well as a slew of local breweries and wineries.

“We are happy to bring such an iconic institution as the Washington Redskins into the airports, continuing our mission of providing travelers with a local experience from the very beginning to the very end of their trip,” said Paul McGinn, President of MarketPlace Development. “The Metropolitan Washington Airports Authority, HMSHost and Morgan Group Ventures have been excellent partners in prioritizing local flavors in the airports’ concessions program that represent the Washington D.C. region.”

Making it to early morning practice – err – flights is a delight with a selection of breakfast favorites to kick off the day, ready for victory. For ultimate convenience, there is a dedicated grab-and-go area perfect for travelers to pick up a last minute drink or snack on the way to their flight.

Travelers can shop at the adjacent retail store for official team merchandise and souvenirs that will keep their team spirit going all the way to their gate and beyond.

Global restaurateur HMSHost is a world leader in creating dining for travel venues. HMSHost operates in more than 120 airports around the globe, including 46 of the 50 busiest airports in North America. The Company has annual sales in excess of $3.1 billion and employs more than 39,500 sales associates worldwide. HMSHost is a part of Autogrill Group, the world’s leading provider of food & beverage services for people on the move. With sales of over €4.5 billion in 2016, the Group operates in 31 countries and employs over 57,000 people. It manages approximately 4,000 stores in about 1,000 locations worldwide. Visit www.HMSHost.com for more information. We can also be found on Facebook at fb.com/HMSHost and on Twitter at @HMSHost.

Headquartered at Inova Sports Performance Center at Redskins Park in Ashburn, Virginia, and owned by Daniel Snyder, the historic Washington Redskins Football Club has won five World Championship titles including the 1937 and 1942 National Football League Championship games, as well as Super Bowls XVII, XXII and XXVI. Founded in 1932 as the Boston Braves in Massachusetts, the team changed its name to the Redskins in 1933 and relocated to Washington, D.C., in 1937. Since then, the team has become one of the most recognizable professional sports franchises in history, featuring multiple Hall of Fame coaches, 19 members of the Pro Football Hall of Fame (with 11 others who also were Redskins) and becoming the first team in the NFL with an official marching band and fight song, “Hail to the Redskins.” The Redskins have been owned by Dan Snyder since 1999, and beginning in 1997, began playing their home games at FedExField in Landover, MD.