TORONTO, 2015-1-23 — /Travel PR News/ — Today’s grand opening of Twist by Roger Mooking marked a major milestone in the ongoing upgrades to the dining program at Toronto Pearson International Airport. The new restaurant is brought to travellers by global restaurateur HMSHost, in partnership with celebrity chef, television host, and cookbook author Roger Mooking. Twist is located post-security in Terminal 1 by Gate D36 and it fits right in with Toronto Pearson’s and HMSHost’s dining vision to bring more local flavours into the airport. Roger Mooking is well-known for his exceptional talent in the culinary and entertainment realms, making this a perfect partnership to convey HMSHost’s Feeling Good on the Move® motto to guests. Officials from the airport, HMSHost, and Roger Mooking joined in today’s ribbon cutting celebration which included remarks and menu samplings for guests and travellers.

“Bringing Twist to Pearson is a dream come true for me. Being in the airport has allowed me to showcase some new and exciting menu items for travellers that will give them a taste of our city’s uniquely diverse culinary scene,” said Roger Mooking. “Working with HMSHost to bring this restaurant to life has been such a great experience and I sincerely hope our guests will love what we have created together.”

Twist incorporates a “global twist” on locally sourced North American comfort foods at Toronto Pearson. With menu items created by Roger such as the Splat Scones, made with Devonshire cream, lavender honey, and peameal bacon; and the Fried Chicken, made with Japanese spices and Thai-influenced crispy herbs with a lime honey dip for presentation and flavour, travellers will be delighted in the opportunity to experience Roger’s culinary flair. Roger focuses on increasing the healthy, gluten free, vegetarian, and sustainable options available to travellers at the airport, with dishes that pack a powerful punch of flavour, and Twist is full of such offerings.

“Toronto Pearson has been working with local celebrity chefs over the past few years to create a strong sense of place for our passengers. We are very pleased that Roger Mooking has joined forces with our partner HMSHost to bring to life an exciting culinary experience,” said Scott Collier, Vice President, Customer and Terminal Services, Greater Toronto Airports Authority. “Twist by Roger Mooking brings flavour in a big way. He blends fresh, locally sourced ingredients mixed with international flavours, offering a culinary adventure for people flying through Terminal 1.”

In addition to working with HMSHost on Twist, Roger is consulting on several new dishes and influencing menu enhancements for many of HMSHost’s other restaurants at Toronto Pearson. Roger is also integrating local suppliers such as Donato Harvest, Kristapsons Salmon, Rowe Farms, Pingue Prosciutto, Sausage King, and Monte Forte Dairy into his menu creations.

“Twist is a restaurant that travellers of all ages and demographics will love from the moment they step inside. Roger has created a menu unlike anything we’ve seen before, and not just for an airport. Travellers will love the use of exotic flavours and spices,” said Amy Dunne, Vice President of Business Development at HMSHost. “Roger has a dynamic personality and world-class culinary skills, a combination that has made it such a pleasure to work with him on Twist, and we look forward to continuing our partnership for years to come.”

Roger is host and co-creator of the internationally broadcast television series Everyday Exotic, and has published an award-winning cookbook based on the show. He is also co-host of Heat Seekers on Food Network and host of Man Fire Food on Cooking Channel. Roger has amassed multiple accolades such as The Maverick Chef Award and Premiers Award, as well as notable mentions on numerous “Best Of” lists. His extraordinary culinary talent has also secured him a spot as a recurring judge on Food Network Canada’s hit show Chopped Canada, and has led to appearances on The Today Show, Good Morning America, The Marilyn Denis Show, Top Chef Canada and Iron Chef, as well as food and wine shows globally.

ABOUT HMSHOST
Global restaurateur HMSHost is a world leader in creating dining for travel venues. HMSHost operates in more than 100 airports around the globe, including the 20 busiest airports in North America. The Company has annual sales in excess of $2.7 billion and employs more than 30,000 sales associates worldwide. HMSHost is a part of Autogrill Group, the world’s leading provider of food & beverage services for people on the move. With sales of around €4 billion in 2013, the Group operates in 30 countries and employs some 56,000 people. It manages approximately 4,700 stores in over 1,000 locations worldwide. Visit www.HMSHost.com for more information. We can also be found on Facebook at fb.com/HMSHost and on Twitter at @HMSHost. 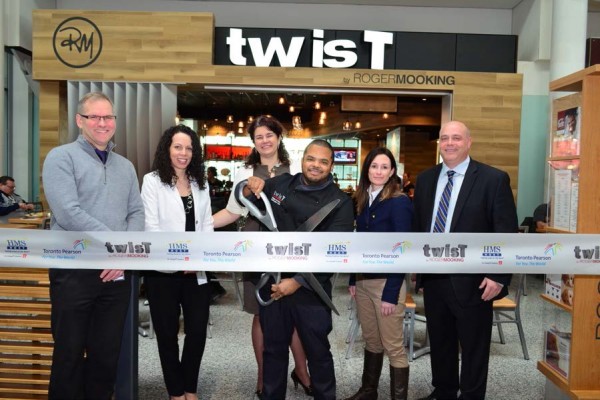