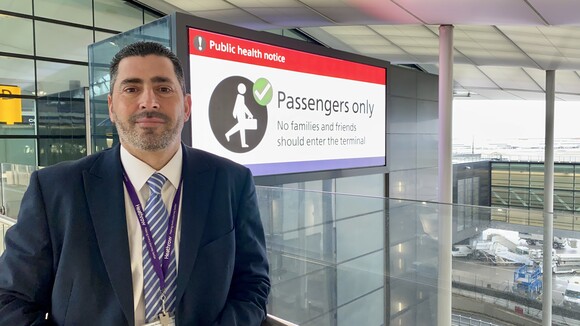 London, UK, 2021-Mar-11 — /Travel PR News/ — Tonight ‘Heathrow: Britain’s Busiest Airport’ returns to our screens, against the backdrop of the global pandemic, showcasing the airport as it grapples with the biggest challenge in its history. Where previously, colleagues would have dealt with bustling departure lounges and excited travellers as they carefully managed Heathrow’s capacity constraints, this series provides a behind-the-scenes look at how the airport’s very own key workers have adapted to new safety measures, global travel requirements, terminal closures and wide-scale repatriations.

Fans of the show will spot familiar faces from the previous series, including Demi in his new role as Service Delivery Manager, as he adapts his customer service style to a post-pandemic world. The seventh series also debuts some new frontline faces that have played an instrumental role in the airport’s response to some of the pandemic’s challenges. The show follows COVID Marshal, Natalie, as she works to keep passengers safe and the airport COVID-secure, as well as Air World Cargo Driver Dylan, who plays a key role in keeping the UK’s vital supply lines open for the delivery of PPE and other essential medical supplies during the height of the crisis, as the airport ramped up its cargo capabilities.

BAFTA Award winning Julie Walters returns to narrate as the show examines a range of COVID-induced challenges faced by colleagues.

The aviation industry has been devasted by COVID-19, with the sector ground to a near complete halt by global travel restrictions. Although Heathrow’s passenger numbers have dropped from nearly 81 million in 2019 to 22 million in 2020 – levels last seen in the 1970s – Heathrow remains Britain’s busiest airport.

The series was filmed in line with the British Film Commission and Government guidelines, using a reduced RAW team who followed stringent safety protocols while shadowing show contributors, as they handle challenges including going from over 200,000 passengers a day to now a small fraction and airlines relocating into Terminals 2 and 5.

Heathrow Chief Executive John Holland-Kaye said: “This series of Heathrow: Britain’s Busiest Airport is unlike any other. Viewers are invited behind-the-scenes to follow how the airport operates during a global pandemic, showcasing our incredible colleagues working around the clock to keep our passengers and people safe. The show gives an insight into some of the challenges we face as a business and how our colleagues have responded with great resilience and compassion. I’m grateful to all the key workers at Heathrow for keeping the UK’s hub airport open for vital supplies and essential journeys during the pandemic.”

Narrator Julie Walters said: “As a fan of the show, it’s been fascinating to see how Heathrow has changed during the pandemic. The series reveals the tremendous amount of new measures in place to keep everyone safe and colleagues working tirelessly to keep the airport open.”

ITV welcomes back previous season favourites and debuts new faces of the operation, many of whom live locally to Heathrow.

Audiences can visit Heathrow’s dedicated HBBA website – www.heathrow.com/hbba to find more information on Heathrow facts and figures, as well as articles on the stars of the show. Fans are also invited to join the conversation on social media using #BritainsBusiestAirport.