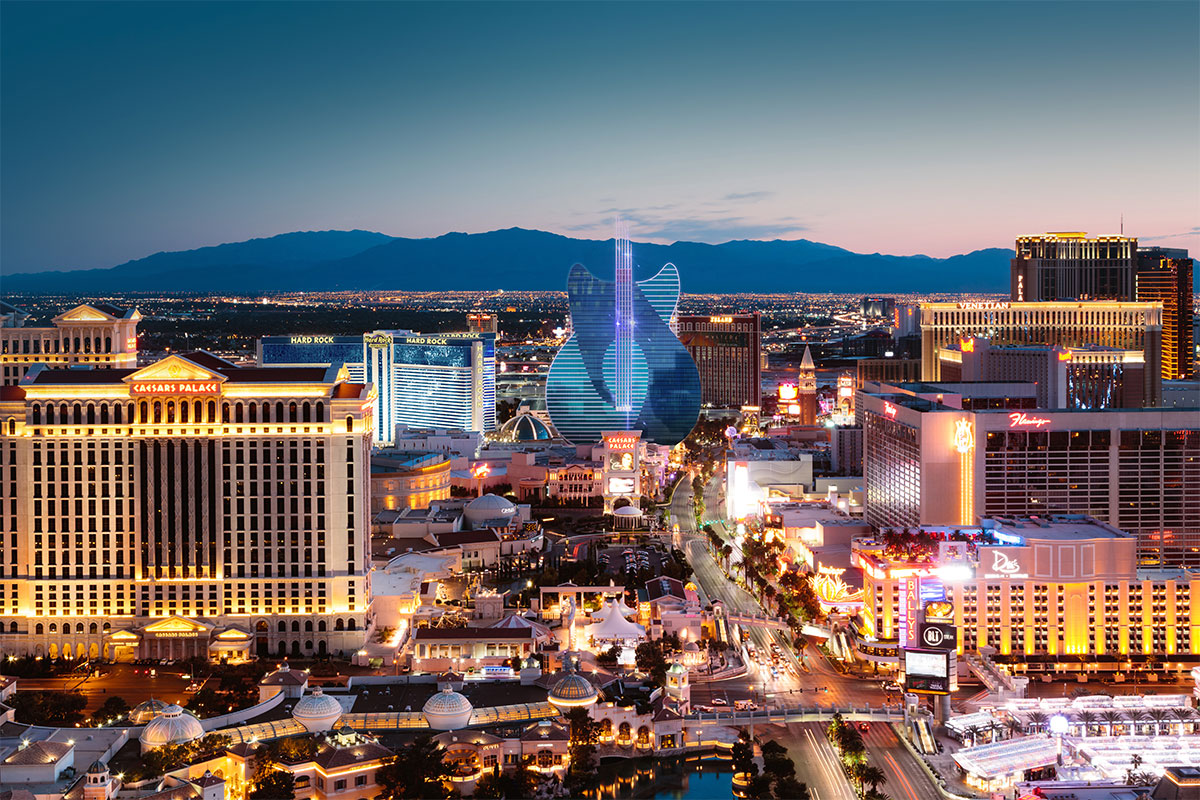 LAS VEGAS, NEV., 2023-Jan-17 — /Travel PR News/ — Hard Rock International (HRI) on Friday received regulatory approval from the Nevada Gaming Commission for its acquisition of The Mirage Hotel & Casino from MGM Resorts International. HRI assumed operations control of the property as of 6 a.m. Monday, December 19. Under terms of the transaction, HRI paid $1.075 billion in cash for the operating assets of The Mirage Hotel & Casino. HRI entered into a long-term lease agreement with VICI Properties Inc. for the real estate property of The Mirage.

The 3,044-room casino resort will continue to operate as The Mirage Hotel & Casino until the renovation and rebranding of the property to the Hard Rock Hotel & Casino Las Vegas is complete. The process is anticipated to take an extended period, but ultimately will dramatically reimagine every aspect of the resort and change the Las Vegas skyline with the addition of a Guitar-shaped hotel tower adjacent to Las Vegas Blvd.

“Today, we’d like to officially welcome the 3,500 team members at The Mirage to the 45,000 global Hard Rock family and express our gratitude to the Nevada Gaming Control Board and the Nevada Gaming Commission for approving the gaming license for us to operate The Mirage Hotel & Casino,” said Jim Allen, Chairman, Hard Rock International. “We are excited to create an integrated resort on The Strip that will make this legendary entertainment community proud.”

Daily operations of the famed Las Vegas resort are set to continue under The Mirage brand for the foreseeable future, and all room reservations and group bookings will be honored with no action required by guests or group organizers. The Mirage will continue to offer world-class entertainment and dining options including, Cirque Du Soleil’s The Beatles™ LOVE™ through 2023. There are no plans to close The Mirage or to lay off any of the team members as one media outlet incorrectly reported recently.

Casino players and guests will now enjoy Unity™ by Hard Rock, a global loyalty program unlike any other that will enable patrons to earn and redeem rewards at participating Hard Rock Hotels, Cafes, and Casinos around the globe.

Hard Rock expects to release details of the rebranded and reimagined resort, its new features and attractions, and development timeline at the end of 2023. Barclays served as exclusive financial advisor to Hard Rock International in connection with the transaction, and Jones Day served as legal advisor to Hard Rock International together with Fox Rothschild LLP and McDonald Carano LLP as special gaming counsel.

The Mirage’s iconic history began as the Strip’s first megaresort and continues to offer guests an exotic world-class destination unlike any other. The resort features contemporary accommodations; dynamic entertainment including The Beatles LOVE by Cirque du Soleil, Shin Lim: LIMITLESS and the Aces of Comedy series; tantalizing restaurants created by the world’s most renowned chefs including Tom Colicchio, and a luxurious spa and salon. As of December 19, 2022, The Mirage Hotel & Casino is owned and operated by Hard Rock International (HRI) as it transitions into an era with refreshed energy. Mirage guests and visitors can earn and use points on Hard Rock’s global platform, Unity™, at more than 150 participating Hard Rock Cafes, Hotels and Casinos anywhere in the world. For more information and reservations, visit mirage.com, call toll free at (800) 374-9000, or find us on Instagram, Facebook and Twitter.

You may also be interested in:  Metrolink provided free rides on Earth Day to encourage people in helping improve air quality in southern California

Hard Rock International (HRI) is one of the most globally recognized companies with venues in over 70 countries spanning 265 locations that include owned/licensed or managed Hotels, Casinos, Rock Shops®, Live Performance Venues and Cafes. HRI also launched a joint venture named Hard Rock Digital in 2020, an online sportsbook, retail sportsbook and internet gaming platform. Beginning with an Eric Clapton guitar, Hard Rock owns the world’s largest and most valuable collection of authentic music memorabilia at more than 86,000 pieces, which are displayed at its locations around the globe. In 2022, Hard Rock was once again named Land Based Operator of the Year at the Global Gaming Awards, a designation the company has received three times in five years. Hard Rock Hotels was honored as the number one brand in Outstanding Guest Satisfaction for the second year in a row among Upper Upscale Hotels in J.D. Power’s North America Hotel Guest Satisfaction Study. This designation is the fourth consecutive year the iconic brand has been among top brands in this category. HRI is the first privately-owned gaming company designated U.S. Best Managed Company by Deloitte Private and The Wall Street Journal for the second year. Hard Rock was also honored as one of Forbes’ Best Employers for Women, Diversity and New Grads and a Top Large Employer in the Travel & Leisure, Gaming, and Entertainment Industry. In 2021, Hard Rock Hotels & Casinos received first place ranking in the Casino Gaming Executive Satisfaction Survey conducted by Bristol Associates Inc. and Spectrum Gaming Group for six of the last seven years. Hard Rock International currently holds investment grade ratings from primary investment rating agencies: S&P Global Ratings (BBB) and Fitch Ratings (BBB). For more information on Hard Rock International, visit www.hardrock.com or shop.hardrock.com.

You may also be interested in:  Emirates enhances customer experiences with new hospitality-based strategy