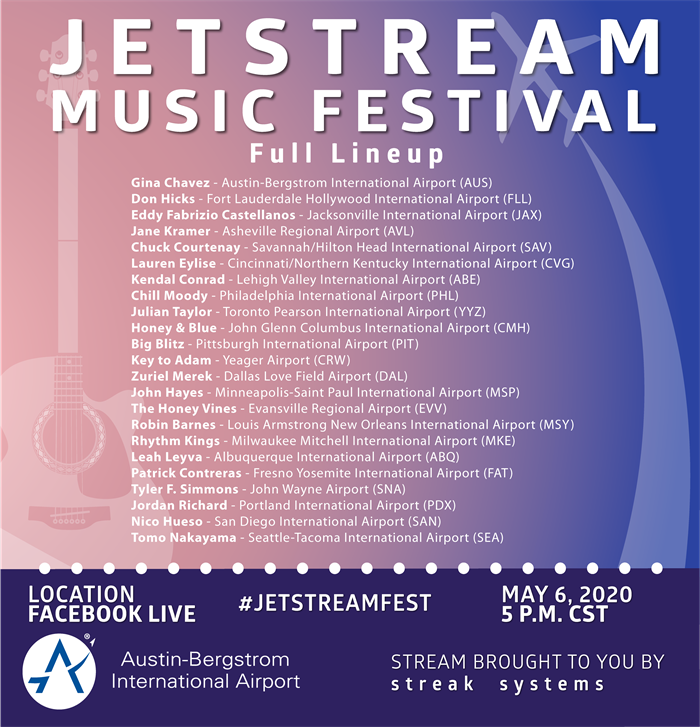 Erlanger, KY, 2020-May-05 — /Travel PR News/ — The JetStream Music Festival, taking place on Wednesday, May 6 at 6:00 p.m. EST, is an online celebration of music between 23 North American airports, including the Cincinnati/Northern Kentucky International Airport (CVG). The stream will take place on Facebook Live and will feature performances from musicians representing each community. Each musician will have a virtual tip jar to which viewers can contribute during the stream.

Austin-Bergstrom International Airport will host the livestream from Austin, Texas, “the Live Music Capital of the World.” Austin’s Latin pop songstress, Gina Chavez, will perform and host the event.

CVG has partnered with ArtsWave, the engine behind Greater Cincinnati’s arts, to bring Lauren Eylise, eclectic-soul singer-songwriter, to the lineup. Lauren, a native Cincinnatian, has opened for the likes of Erykah Badu, Patti LaBelle, and Train; she has also been featured on NPR’s “Tiny Desk Concert Contest.”

The full lineup for the event will be as follows.

The stream will also highlight community organizations and resources in each airport’s region. For more information about the JetStream Music Festival, click here.