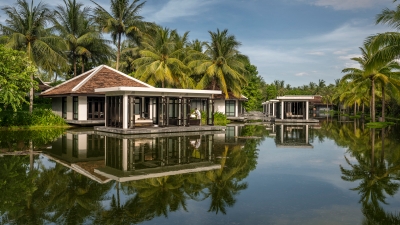 Hoi An, Vietnam, 2019-Sep-19 — /Travel PR News/ — Four Seasons Resort The Nam Hai, Hoi An, Vietnam has again been recognised as a worldwide wellness leader at the 10th annual SpaChina Awards, named Global Wellness Resort of the Year for the second consecutive year.

During a gala dinner on September 11, 2019, SpaChina celebrated industry leaders and innovators at the culmination of its annual three-day SpaChina Summit, which saw workshops and talks from spa professionals, owners and investors featured alongside cutting-edge spa product and equipment brands.

Commenting on the accolade, Luisa Anderson, Regional Director of Spa Four Seasons Resorts Asia, said: “Since its inception, The Nam Hai’s Heart of the Earth Spa has authentically and exclusively dedicated itself to a celebration of the present moment, an approach that is more pertinent than ever in these increasingly chaotic times. We’re extremely grateful to SpaChina for recognising the importance of wellness as an integrated state of being and connection by honouring The Heart of The Earth Spa for the second year running; this award is credit to each and every member of this incredible team.”

With its roots firmly planted in Vietnamese values of compassion, stability and non-judgment, The Heart of the Earth Spa combines experiential treatments with a state of reverential being. Renowned Vietnamese Zen Master and peace activist Thich Nhat Hanh inspires a spa menu dedicated to mindfulness, from floating wishing candles on the Spa’s lotus-filled lagoon to crystal singing bowls tuned to 432 Hz., the harmonic intonation of nature.

Divine luxury and curated connection bring the Spa’s ethos to life. Six heavenly double and two single spa villas appear to float atop the lagoon, while treatments are grouped into three Earth-based virtues – Stability to nourish the physical body; Creativity to release blockages and explore new possibilities; and Non-Judgement to promote inner peace and compassion.

Set among gardens rich with birdsong, the Resort’s 130-square-metre (1,400 square foot) Thanh Tĩnh Yoga Pavilion offers classes in mindfulness, meditation and yoga, including AntiGravity Yoga to further promote healing self-awareness and serenity, while the Spa’s reach extends further still into the Resort Villas via Interbeing, a personal in-room wellness kit featuring aromatherapeutic essential oil blends; mindful-meditation tracks available in-room; bespoke bathing rituals; eight pillow choices; and a bell of mindfulness used by Vietnamese monks. Natural abundance and an ongoing escape from the frenzy of modern life also await in the Resort’s tranquil grounds, beneath the shade of 4,500 palm trees, or along the private kilometre-stretch of Ha My Beach, considered to be best in Vietnam.

In addition to its annual Visiting Masters program, The Heart of The Earth Spa also runs an annual Green Season Retreat. Available on two sets of dates – October 8-12, 2019 and November 28-December 2, 2019 – this year’s program will be facilitated by Dr. Buathon Thienarrom, creator of the ZenNaTai (“The Transformational Touch”), and will comprise Sitting, Walking and Eating Meditation sessions and Dharma Talks designed help guests discover the bounteous benefits of living in the present moment.