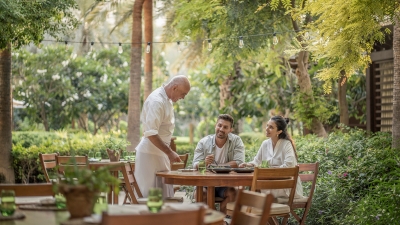 The conceptual menu’s culinary selection includes 12 wholesome, plant-based items including starters, entrées and desserts. The full Folia menu is available in the Resort’s newly unveiled garden oasis purpose-built for the debut. Folia will also be presented as part of the Hotel’s Wellness Menu in available in rooms and suites, designed for the health-conscious traveller.

“The UAE’s launch of Folia at a dedicated venue, part of a property renowned for its natural beauty, is a huge milestone for our collaboration with Matthew Kenney. We see Dubai as an extremely important market for healthy cuisine, and we’re confident that the residents of the Emirate will enjoy both the experience and atmosphere of the venue while delighting in the meal itself,” said Prince Khaled, remarking on Folia’s launch at Four Seasons Dubai at Jumeirah Beach.

The launch of Folia in Dubai follows the successful collaborations at sister properties in both Beverly Hills and in Bahrain. Folia at Four Seasons Resort Dubai at Jumeirah Beach will be the first foray into the Emirates, featuring refreshing options for health-driven individuals. Items include appetisers such as beetroot poke marinated in a flavourful ponzu lime broth; hearts of palm nicoise with cherry tomatoes, peewee potato and olives; beet hummus with oregano cream; and dukkah avocado with spicy greens, preserved lemon and tomato jam.

Executive Chef Gilles Arzur said of the collaboration, “We are noticing that our guests are ever more interested in the food they are consuming and the health benefits of shifting to a plant-based diet, so we are excited to bring this offering to our guests and present a menu that puts a plant-based twist on favourite menu staples.”

Folia will be presented in the heart of the Resort, in its own secluded garden oasis surrounded by lush shady palms; the perfect ambiance for plant-based cuisine.