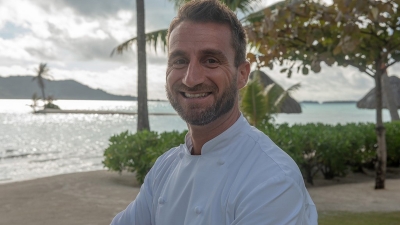 A native of Naples, Italy, Attardi began his career at the foot of the Alps at Schweizerhof Zermatt, in Switzerland. As he developed his culinary skills, he served in various locations between Switzerland, Palm Springs and Miami, before joining The Ritz-Carlton, Grand Cayman, where he spent seven years. He then ventured off to Spain, where he served as executive sous chef at The Ritz-Carlton, Barcelona, before being named culinary director of The Ritz-Carlton, Bali. From there, he joined the opening team of Bulgari Hotel Beijing, where served as culinary director.

“We are excited to welcome Chef Attardi to the Four Seasons family,” says Maria Jagla, General Manager of Four Seasons Resort Bora Bora. “His experience around the world, coupled with his vision and creativity will lead our culinary experience into its next level.”

Attardi earned his hospitality culinary degree from University Gabriele Rossini, and speaks English, Italian, Spanish and French. An avid outdoorsman, Chef Attardi looks forward to the abundance of recreational pursuits in Bora Bora, where he and his wife Nada now call home.