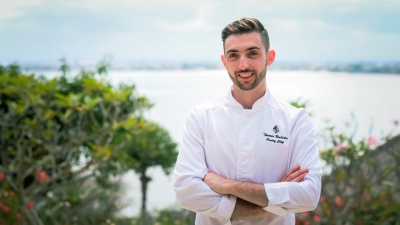 Bali at Jimbaran Bay, Indonesia, 2021-Jan-27 — /Travel PR News/ — 2021 is off to a sweet start at Four Seasons Resort Bali at Jimbaran Bay with the appointment of Pastry Chef Thomas Bouledin, who brings Michelin-star credentials and his French-Spanish heritage to the Resort’s world-class culinary team.

At just 26, Thomas may be young in years, but not on experience. He began his chef apprenticeship at the age of 15 and enjoyed the refinement and precision required for pastry cooking. He progressed to several Michelin-starred restaurants in Europe, working in competitive and demanding environments, but it was at the family-owned Mr & Mrs Renou patisserie in Switzerland where he found his true mentor.

“This was the best. I was one of only three people working there, not like at big pastry shops that have 40 chefs each specialising in one thing,” says Thomas. “Mr Renou is very famous, having achieved the prestigious MOF award (Meilleur Ouvrier de France) as France’s best craftsman. He became my mentor. One of the cakes on our menu at Four Seasons is a memory of my time working with him – the fraisier strawberry cake.”

A sentimental soul, Thomas’ sweets are like a collection of personal memoirs, each inspired by a story from his childhood or a place he’s travelled. The “It’s About Thyme” apple tatin remembers the classic dessert that his French grandmother used to make, while Thomas has added an unusual twist of thyme in honour of his Spanish grandmother, who grew the herb in her garden and used it in many savoury dishes.

In his quest for the freshest, locally-produced ingredients, Thomas has explored the resort’s on-site herb and vegetable gardens, and criss-crossed Bali visiting micro-farmers as well as larger producers. His new Cloud Nine dessert menu celebrates the incredible variety of fruits and spices available on the island, such as Bali banana and vanilla mousse (with no added sugar), caramelised mango cheesecake mousse, strawberry and orange blossom opera, and of course his grandmothers’ apple tatin.

He’s also drawn inspiration from Sundara Beach Club’s sustainable cocktail menu to launch a “Zero Waste” kalamansi lime meringue pie, which uses the juice, flesh and skin of local limes for marmalade and curd, while the egg shells go to the compost. “Respect for nature, fresh produce and suppliers – this is my cooking philosophy,” says Thomas.

“Thomas’ appointment further strengthens the culinary team and enhances our guests’ dining experiences,” says Nicolas Senes, Food and Beverage Director of Four Seasons Jimbaran Bay. “He is injecting new inspiration and ideas alongside our exceptional Balinese chefs, under the leadership of Executive Chef Phillip Taylor – who himself has a strong background in classic French technique as chef de cuisine at Michelin-starred restaurants. We are well-positioned to cater for the most discerning guests and maintain the high standards for which Four Seasons Jimbaran Bay is renowned.”