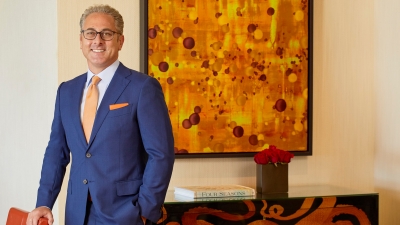 A fourteen-year veteran of Four Seasons Hotels and Resorts, Marc Bromley has worked his way up in the company, leading with his good humoured, caring nature and dedication to service excellence.

“Marc is an exceptional leader and well positioned to build upon the Hotel’s historic legacy, bringing his characteristic passion and experience to our beloved Washington, DC Hotel,” says Christian Clerc, President, Global Operations and a former General Manager in Washington, DC.  “Four Seasons is a family – even as we move on to destinations far and wide, we remain deeply connected to each person we’ve worked with and each community we’ve called home. Marc’s father Stan is a legend in the hospitality business, and Marc’s homecoming allows him to extend his father’s legacy while also imparting his own renewed vision for the Hotel and its people.”

Bromley began working for the company in 2007 as Assistant Food and Beverage Director at Four Seasons Hotel Chicago, but his relationship with Four Seasons began much earlier when his family lived at Four Seasons Hotel Washington, DC while his father Stan was its General Manager.  In the years since, he’s risen through the ranks with increasing responsibilities, earning promotions and challenging new assignments along the way.  In 2008, he was Director of Food and Beverage at Four Seasons Hotel Washington, DC during the opening of BOURBON STEAK, now a DC institution. Bromley became known for his quick wit, his “let’s do this!” attitude and his warm and jovial candour with guests and staff alike.

You may also be interested in:  Four Seasons Hotel Kuwait at Burj Alshaya now uses only 100 percent cage-free eggs for all menu items

His first Resort Manager position was in Palm Beach, followed by Costa Rica and Scottsdale, where he was promoted to General Manager in 2016.  A move to Maui followed, where Bromley set new standards for service, employee engagement and hotel improvement at one of the company’s original resorts.

When asked about the most important lesson his father taught him about hospitality, Bromley says, “Everything has to start with care for our people, the culture of care for one another. The Golden Rule – everything flows from there. Four Seasons has always been deeply connected to the community through business partnerships and charitable work.  I hope to continue to grow our involvement in both as DC renews itself.”

Looking forward, Bromley plans to use his experience at the emblematic property to shape its future. Four Seasons Hotel Washington, DC, one of the oldest hotels in the company and a landmark in the Nation’s Capital, has already built a legacy. With the recent renovations of the events spaces, the Presidential Suites and the awe-inspiring Royal Suite, the Hotel is poised to usher in a new era, with a visionary and inspiring leader at its helm.

Bromley returns to DC with his family – perhaps inspiring a third generation of Four Seasons General Managers in the process.