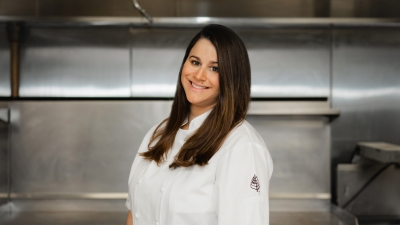 As Executive Chef, Tampakis is responsible for overseeing the Hotel’s culinary experiences with the mission to elevate the lifestyle proposition through various collaborations and partnerships with other iconic New York City chefs. Tampakis will also be responsible for the creation and execution of new menu offerings and culinary experiences for the residents of 30 Park Place, the residential component.

“When you finally have the opportunity for a dream to come true, it’s easy to stay motivated and get excited about what you do each day,” says Tampakis. “That’s how I feel about returning home to New York City and working with the best in the business at Four Seasons Hotel New York Downtown.”

A Brooklyn, New York native, and the daughter of a celebrated pastry chef, Tampakis grew up surrounded by some of the most talented and award-winning chefs, motivating her to pursue a culinary career that began at a local pizzeria. Following her graduation from the University of Delaware’s Hotel and Restaurant Management Program in 2008, she went on to complete the Culinary Arts program at the Institute of Culinary Education in New York City, where she started a career training program. Upon graduation, she joined globally renowned Chef Jean-Georges Vongerichten’s team in Midtown Manhattan, gaining the skill set required to thrive in New York City’s demanding hospitality industry.

“We are overjoyed to have Chef Tampakis at the helm of our dynamic culinary program,” says Thomas Carreras, General Manager of Four Seasons Hotel New York Downtown. “Her expansive knowledge of global cooking techniques and styles, paired with her authentic taste, will undoubtedly ensure our Hotel remains a world-class dining destination for our global Hotel guests and local New Yorkers. We are also very proud to continue to build our female leadership team.”