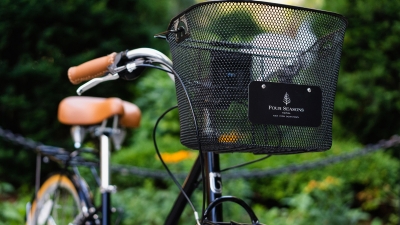 New York, U.S.A., 2021-Aug-26 — /Travel PR News/ — With the end of summer and beginning of fall approaching, Four Seasons Hotel New York Downtown is launching a new complimentary Bike The City experience. The iconic luxury lifestyle Hotel in Lower Manhattan invites guests to borrow one of its brand new Biria Bikes and sightsee around the city, using a hand-illustrated map by illustrator Tanu Vasu as their guide to Downtown’s must-see spots.

While New York City is one of the most densely populated urban environments in the world, the city, and specifically Lower Manhattan, is surrounded by water on all sides and boasts great natural beauty. With more than 1,350 miles (2,175 kilometres) of bike lanes around the island, the city is extremely bike friendly and offers the ideal way to take in the sights and sounds of Lower Manhattan. Curated by the Concierge Team at the Hotel, the brand new Bike The City experience and custom map showcase the most special parts of Lower Manhattan, where there is no shortage of exceptional attractions, each treasured for its cultural significance.

“We are delighted to bring the next phase of guest experiences to Four Seasons Hotel New York Downtown. The vision behind our Bike the City experience is to bring to life the best of downtown as a unique destination, and highlight our Concierge knowledge of Downtown, celebrating local craftsmanship, and building on our current lifestyle offerings at the Hotel. We hope our guests will take full advantage of this new experiential offering and delight in some of the unique destinations featured in the bespoke map we have collaborated on,” says Thomas Carreras, General Manager.

Whether perusing Downtown galleries or venturing to find the best cocktails on the West Side’s waterfront, the new fleet of six Biria bikes will provide guests with the best way to travel around Lower Manhattan. Born in Germany, US-based Biria Bikes gained popularity for bringing bicycles to North America that captured the same spirit found in the most popular models being ridden across Europe. “Biria CityBikes were designed for New York City. They are utilitarian, stylish, and made with high-quality components to withstand the NYC streets,” says Tony Biria of Biria Bikes. “Four Seasons guests want to ride in style. The Biria CityBikes have that classic European design, and at the same time, a very comfortable ride.”

To help navigate their journey, guests will receive a custom-illustrated local map designed by artist Tanu Vasu of @NYCCurated. Vasu’s map has highlighted the top hotspots for both tourists and locals in Lower Manhattan, and spans a wide array of categories including food and entertainment, art and culture, shopping, family friendly locales, and the best places for a photo opportunity or a picnic. The Downtown Map can also be used as a walking map and collector’s item to take home as a special souvenir from New York.

“The individuality of Downtown Manhattan can’t be replicated elsewhere — within the span of one block you can find retro bodegas, Michelin-star restaurants, unique retail boutiques and hole-in-the-wall cafés, all of which I wanted to capture in my map through my colourful palette,” says Vasu. “It’s more than the iconic landmarks and cultural icons that make the area so remarkable. Downtown NYC has high-octane energy that has been built by the colourful cast of characters and trendsetting neighbourhoods that needs to be experienced to be understood. The ever-changing neighbourhoods of Downtown Manhattan are relics of the city’s vast history that I observed and re-imagined through my illustrations.”

Featuring iconic Lower Manhattan destinations, such as Lower East Side’s Russ & Daughters, What Goes Around Comes Around in SoHo, and the Seaglass Carousel in FiDi, Vasu says “it was these elements of classic and modern that come together so beautifully and form Downtown Manhattan that inspired me while creating the map.”

Bike The City is one of many recent cultural and wellness experiences offered at Four Seasons Hotel New York Downtown, along with The Streets Are A Gallery, a downtown street art and graffiti tour; the debut of a collection of Self-Healing Immersions; and a collaboration with the Princeton Longevity Center on a comprehensive wellness package called Life + Longevity.

Bicycles are available for guests’ complimentary use through the Hotel’s Concierge. To accompany the new bikes, Four Seasons Hotel New York Downtown is also set to launch a new picnic program designed by the Hotel’s new Executive Chef, Maria Tampakis.

German born, US-based Biria Bikes is committed to providing the ultimate comfort and quality in riding bicycles. The brand gained popularity in Europe for its flair for being both utilitarian and stylish. Biria Bikes USA was born in 2002, with the goal of bringing bicycles to North America that captured the same spirit found in the most popular models being ridden all across Europe.