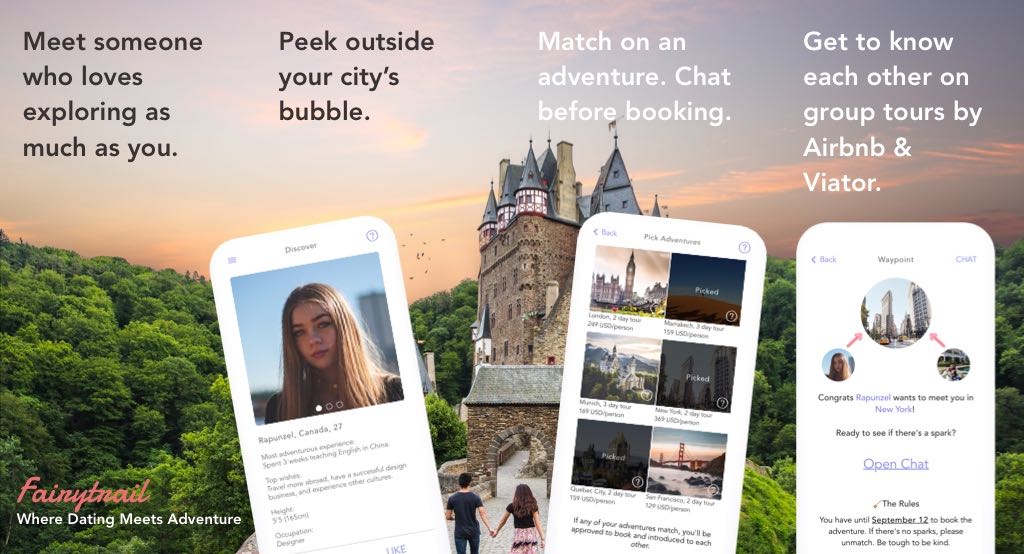 San Francisco, CA, USA, 2019-Sep-13 — /Travel PR News/ — Heralded as a “revolutionary dating app” by its users, Fairytrail is a dating app for remote workers, digital nomads, and people passionate about travel. With 8 levels of safety, it provides a dating platform for single people to match with one another, then match on recommended tours. It allows people to date while on the road using video chat and provides a bridge to safely meeting in person.

“People are becoming hyper mobile,” says Taige Zhang, the founder of Fairytrail, adding “more than one-third of U.S. workers are in the gig economy. 57 million Americans are freelancers. 5 million are digital nomads. But there isn’t a dating app to serve highly mobile people.”

Furthermore, most dating apps such as Tinder and Bumble want to keep users swiping and messaging, but users actually want to find someone, so they can get on with their lives— to start having amazing experiences together. And Fairytrail promises exactly that.

Determined to cultivate real-life experiences rather than locking people to their screens, Fairytrail is the only dating app that safely bridges people from online to offline through group adventures.

“[People] will have more fun dating. We’ll actually get to explore the world, try new foods, and see new places and cultures– with people who intrigue us,” says Taige Zhang.

In fact, its revenue primarily comes from getting matched users placed on Airbnb Experiences, Airbnb Adventures, and Viator tours. These are 2-3 day excursions led by a professional travel guide in small groups of 5-25 people.

Designed to be non-invasive like Coffee Meets Bagel, Fairytrail sprinkles users with new people to meet and travel possibilities only a few times a day.

This app is perfect for people who are picky about who they date. By allowing singles to be exposed to people outside their cities, Fairytrail can increase dating diversity and the dating pool size by 31 times for the average US dater.