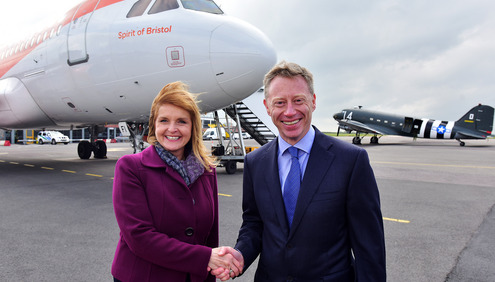 London Luton, 2017-May-10 — /Travel PR News/ — easyJet has today unveiled an aircraft especially named to help celebrate Bristol Airport’s 60thanniversary. The Airbus A319 has been named Spirit of Bristol to mark the airport’s milestone.

easyJet, Bristol’s largest airline, started operations out of Bristol in 2002 and today the airport is the airline’s largest UK base outside of London. In the past 15 years a massive 45 million passengers have travelled to and from the airport with easyJet.

easyJet operates up to 638 flights in and out of Bristol Airport per week flying over four million passengers to 62 airports in 18 countries from Bristol.

Ali Gayward, easyJet’s UK Country  Manager, commented: “Bristol Airport is our largest UK base outside of London, so we delighted to have unveiled the Spirit of Bristol  aircraft at Bristol Airport today to mark its special milestone.

“We have seen increasing demand year on year at Bristol airport and, as the Airport’s largest airline, we fly more than 4.2m passengers annually and offer an unrivalled network of over 62 routes.

“In FY17 we will offer over 4.86 million seats – a 6.7% increase over 2016 and remain committed to growing in Bristol. easyJet will continue to ensure it is easy and affordable for people, flying to and from Bristol to have direct air links to as many European destinations as possible.”

Robert Sinclair, Chief Executive Officer at Bristol Airport, commented:“easyJet has played a prominent role in the Airport’s recent history so we are delighted that an aircraft has been named ‘Spirit of Bristol’ in recognition of this long and successful partnership.   As well as marking our 60th anniversary, the specially named A319 will help to spread the word about Bristol Airport and the fantastic offer this region has for leisure and business visitors across easyJet’s extensive network.”