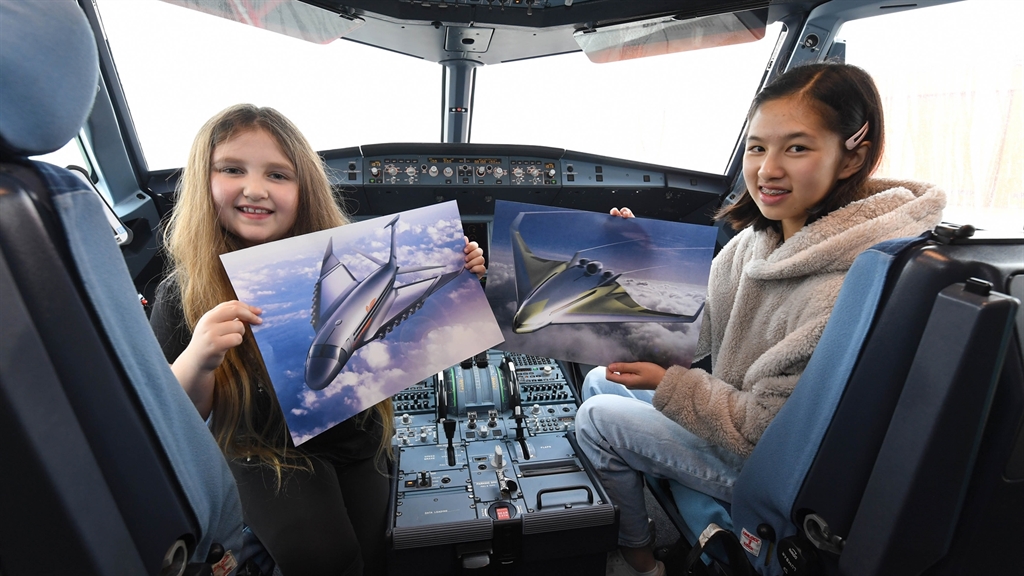 London, UK, 2021-Nov-19 — /Travel PR News/ — Cerys, aged 8 from Norfolk and Lara, aged 15 from Surrey have been crowned the winners of easyJet’s ‘Aircraft of the Future’ competition following a nationwide contest.

The airline launched the competition in October, challenging the next generations of engineers to design their vision for future flying – a passenger plane for travelling across Europe powered by a sustainable energy source. Entries included designs inspired by solar-powered wings to more unconventional energy sources like hamster-wheel and worm-powered planes! The designs also featured a selection of sustainably sourced materials including seats made from coconuts (coir), one of the thickest and most resistant natural fibres available.

The reveal of the winning designs follows the conclusion of COP26 in Glasgow, where the airline announced that it has joined Race to Zero, a global UN-back campaign to achieve net-zero carbon emissions by 2050 at the latest. In joining Race to Zero, the airline is committing to set an interim science-based target for 2035 as well as to reach net-zero carbon emissions by 2050, of which technology for zero-emissions flying will play an important part.

Cerys’ winning design centred on battery power, with solar-powered wings and reusable cups for passengers made of processed banana leaves. Whilst Lara’s design looked at using pressurised hydrogen and fuel-cell stacks to generate electricity to power their passenger aircraft of the future.

Lara’s aeroplane also took inspiration from the animal kingdom with material replicating fish scales for the plane’s fuselage, intended to decrease drag for the plane to improve fuel-efficiency.

All design entries were judged by an esteemed panel of world-class experts in flying, sustainability, design and zero emission technology.

The panel judged all the entries on the quality of the design, interpretation of the theme, creativity, innovation, practicality, and most of all, how the design has considered sustainability and the environment.

Research by the airline of 2,000 British children and adults revealed that well over four in five (83%) British children would like to take up a career that worked in finding solutions to combat climate change through science or technology, with 85% of parents supporting their children in this.

A whopping 95% of children believe that learning about subjects like science and technology for combatting climate change is important and a further 90% of children think that having the chance to be an inventor or designer who invented  things to combat climate change would be  one of the most amazing jobs in the world. Reflecting this love of creativity, nearly four in five children say (79%) use their imagination to think about how they can make the world a better place

With international travel returning to normal, nearly all children (94%) say they’re thrilled to travel to more places with friends and family next year. Highlighting further children’s love of travel, 89% of children agreed that being able to travel to new places was one of the most exciting things they could do when they grow up.

The thought of planes being powered by zero emission technology excites 88% of children – with nearly 9 in ten (87%) excited to travel on these planes.

easyJet’s First Officer Debbie Thomas, who was on the judging panel, and is an engineer and zero-emission aircraft modeller said, “We had some amazing entries and were stunned and incredibly encouraged by the innovation we saw. Cerys and Lara have inspired us all with their winning designs – we’d love to see them join easyJet as engineers one day, working on zero-emission aircraft of the future.”

Frank Stephenson, designer and judge said, “We have been blown away by the designs we have seen, children’s imaginations are so powerful in fuelling ideas and creativity. Huge congratulations to Cerys and Lara!”

Glenn Llewellyn, Airbus Vice President Zero Emission Aircraft and judge said, “There’s nothing more inspiring than seeing the next generation’s enthusiasm for more sustainable flight! I’m thoroughly impressed by the innovative ideas – from fish scales to increase laminar flow to “bow” wings powered by hydrogen fuel cells – put forth by these future aeronautical engineers. It demonstrates curiosity, creativity and a maturity in aeronautical knowledge that is wise beyond their years.”

Jeff Engler, CEO of Wright Electric and judge said: “It was incredibly inspiring to see how creative children were when it came to designing their sustainable aircraft of the future. We were delighted to see the inventiveness and level of detail some of the designs had.”

Cerys and Lara have received a host of money can’t buy prizes in the form of a 3-D model and rendering of their design, produced and signed by Frank Stephenson as well as an experience in an easyJet full-flight simulator and return flights to anywhere on the airline’s network for the winner’s immediate family plus

Additionally, Lara, the winner of the secondary school-age category, has also won a behind the scenes trip to Airbus and a chance to feature on Frank Stephenson’s YouTube podcast channel to discuss their design. The runners up will also be receiving a signed render of their design.

Championing the development of a zero-emission aircraft to de-carbonise aviation has long been a focus for easyJet and the airline is working with its partners Airbus and Wright Electric to accelerate the development of zero-emission technologies. The airline is optimistic that it could begin flying customers on planes powered by hydrogen-combustion, hydrogen-electric or a hybrid of both by the mid to late-2030s.

In 2019, it became the first major airline worldwide to offset the carbon emissions from the fuel used for all its flights, and currently remains the only major airline in Europe to do so. This comes at no additional cost to its customers and the airline only supports projects that are certified by either Gold Standard or Verified Carbon Standard. This is an interim measure while new technologies are developed.

Beyond carbon, easyJet is focusing on reducing plastic – more than 27 million single-use plastic items were eliminated – as well as reducing waste within its wider operations and the supply chain. The airline recently introduced new crew uniforms made from recycled plastic bottles. With 45 bottles in each uniform this has the potential to prevent 2.7 million plastic bottles from ending up in landfill or in oceans over the next five years.

For more information, go to www.easyjet.com/sustainability

The airline takes sustainability seriously and is committed to reaching net-zero emissions flying by 2050. Together with its partners Airbus and Wright Electric, easyJet is working to accelerate the development of zero-emission aircraft technology. In the meantime, the airline is offsetting the carbon emissions from the fuel used for all its flights, at no additional cost to its customers, and only supports projects that are certified by Gold Standard or the Verified Carbon Standard, internationally recognised certification schemes. In addition, easyJet continues to renew its fleet, operate efficiently, and aims to fill most of its seats. Through these activities, the airline has cut its carbon emissions per passenger kilometre efficiency by a third since 2000 and is committed to reducing this further.