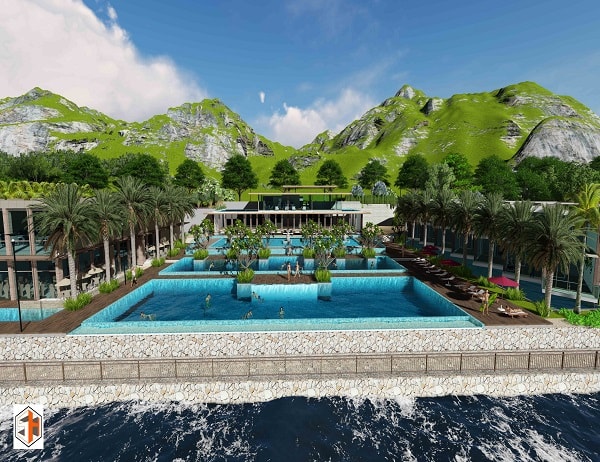 Situated approximately 90km from Ho Chi Minh City in the south of Vietnam, Vung Tau is the former capital of Ba Ria-Vung Tau Province and is spectacularly located on a peninsula with extensive beaches. Vung Tau serves as a popular seaside getaway for domestic travellers as well as tourists from around Southeast Asia.

The upscale dusitD2 Vung Tau is located on the west of the peninsula approximately 10 minutes by car from Vung Tau center. Upon completion, the hotel will comprise 100 rooms set within independent bungalows along with two grand villas.

In line with dusitD2 branding, dusitD2 Vung Tau has a contemporary design with creative and vibrant décor. Facilities include an all-day-dining outlet, seafood restaurant, a stylish bar, a spa and gym, and a ballroom.

Popular attractions on the peninsula include Christ of Vung Tau, a 32-metre-high statue of Jesus Christ; Vung Tau Lighthouse, providing an uninterrupted 360 degree view of the city; and Vung Tau’s beach front, with its wide range of seafood restaurants and bars. Two significant entertainment attractions under development are Vung Tau Aquarium and Bau Trung, a Disneyland styled theme park. The International Airport located in Ho Chi Minh City is approximately 90 minutes by car.

“Last year, Vietnam welcomed 10 million international tourists, an increase of 26 per cent from 2015, and this positive growth only looks set to continue,” said Ms Suphajee Suthumpun, Group Chief Executive Officer of Dusit International. “So now is the perfect time to introduce our contemporary dusitD2 brand to the market, and we are delighted Ha Dat Company has given us this opportunity. We now look forward to providing a hotel experience that not only delights guests with our signature gracious hospitality inspired by authentic Thai values, but which also elevates Vung Tau’s profile as a destination while having a positive impact on the local community.”

Mr Nguyen Vu Hung, Chairman of Ha Dat Company Limited said, “A key objective of this property is to elevate Vung Tau’s standing as a tourist destination, and in Dusit International we have the perfect partner to achieve this aim. Drawing on over 65 years of hospitality experience, the company is renowned for the high quality of its hospitality and services as well as its community approach to business, and we are confident dusitD2 Vung Tau will be a resounding success.”

With 29 properties currently in operation across four brands in eight countries, Dusit International is in a significant growth phase which will see the number of Dusit properties reach 70 within the next three to four years across key markets worldwide.

The company will officially make its Vietnam debut early next year with the opening of the DusitPrincess Moonrise Beach Resort on Phu Quoc island.