MOROCCO, 2019-Dec-27 — /Travel PR News/ — Deserts represent approximately one-third of the planet’s land surface. By definition, a desert is a region that receives about 250 millimeters of rain or less each year. Spaces where human life becomes a feat, if not an impossible one, and where nature presents itself in its most primitive and virgin state. We present some of the deserts that most inspire alternative trips.

Check out next trips to desert tours in Marrakech

Not all deserts are equal. Although the sand predominates in all of them creating infinite waves over the earth’s layer, although life can barely be seen trying to breathe under the suffocating desert sun, each of the deserts I have visited had some peculiarity that made them different from the others.

Chiseled canyons, rocks and sand dunes, also known as the Valley of the Moon, have been the scene of many films. The most remembered is the mythical Lawrence of Arabia, other more recent The Martian, science fiction film directed by Ridley Scott and starring Matt Damon. It deserves a visit through the breathtaking landscapes, in addition to living a unique experience sleeping in a desert camp and seeing the stars from one of the best points in the world while listening to the music of the Bedouins.

The largest hot desert in the world covers 3.5 million square kilometers and crosses 11 countries in North Africa. Morocco, Western Sahara, Mauritania, Algeria, Tunisia, Mali, Niger, Libya, Chad, and Egypt are the countries to which the “desert desert” dominates to a greater or lesser extent. The Sahara is the third-largest desert in the world. Winds and sporadic rains have shaped the Sahara to a landscape of dunes, valleys, plains, and seas of sand. The silence of the desert overwhelms. One of the best or even the best you can visit. You can visit the Sahara on a trip through Morocco. 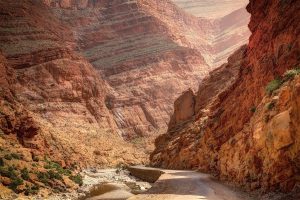 The largest desert in Asia, the fifth largest in the world, crosses two countries, China and Mongolia. There are few places on the planet where it is still possible to disconnect from media, social networks… as can be done in the Gobi. Colossal sand dunes, ice-filled canyons, dinosaur fossils, and camel treks guarantee an adventure trip.

The Thar Desert, which covers 77,000 square miles, forms a geomorphic border between India and Pakistan. The Thar is the most populated arid zone in the world, mostly covered by scrub vegetation, with abundant villages earning their animals’ lives and maintaining a richly colorful desert culture. Few places offer a better framework for tranquility, reflection, and tranquility.

Does a trip inspire you? Check out next trips to Marrakech desert trips

I really want to visit outstanding deserts to spend one of my most unforgettable nights. Also, of course, I go to Morocco where the highest dunes of the Sahara that reach a whopping 460 meters high rise. Although the record of the highest dune in the world is held by the Bolson of Fiambalá, in the northwest of Argentina, with the savage of 1,230 meters high.

For now, among the deserts visited I stay with that of Morocco; for its starry nights, for its considerable dunes and for the golden color of the sand.