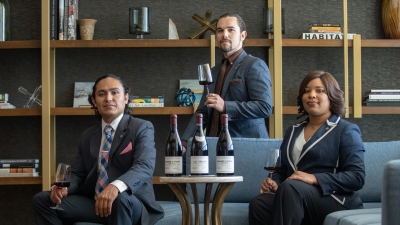 St. Louis, U.S.A., 2022-Aug-10 — /Travel PR News/ — Fresh on the heels of winning the Award of Excellence from Wine Spectator for the third consecutive year, Cinder House at Four Seasons Hotel St. Louis announces the expansion of its team of wine professionals and enhancements to its overall wine program.

Cinder House is just one of just twelve restaurants in St. Louis to be recognized by Wine Spectator for the breadth and depth of its wine list.  The highly respected award is a calling card for discerning wine lovers who seek dining experiences that offer a strong selection from quality producers.

Anthony Geary, Sommelier for Four Seasons Hotel St. Louis, leads the Hotel’s wine program and is responsible for achieving its many accolades.  To help advance his vision of building one of the top wine programs in Missouri, he recently bolstered his team with two additional noted sommeliers. Now, the team of three, all Certified Sommeliers credentialed by the Court of Master Sommeliers, possesses a combined fifty years of experience in food and wine. It is the team’s combined knowledge and diversity that sets it apart not only in St. Louis, but in the Midwest and beyond.

The additions include the highly lauded Alisha Blackwell-Calvert, 2021 “Sommelier of the Year” Wine Enthusiast Magazine Wine Star Award nominee as well as one of the magazine’s “Top 40 Under 40 Tastemakers.” In 2018, Feast Magazine named her a “Rising Star.” Previously, she received the 2015 Walter Clore Certified Sommelier Scholarship for top score and also attained the Certified Specialist of Wine certification through the Society of Wine Educators with a 99% score the same year. Her experience includes working alongside now Master Sommelier Andrey Ivanov at Reeds American Table in St. Louis.

Also new to the team is David Phil Villacis who ditched a potential career in accounting after college to follow his true passion for wine and spirits. He brings an extensive background both in wine and food service as well as in viticulture gained from a stint tending to the soil and vines of a Willamette Valley, Oregon vineyard.  During the pandemic, he also acquired industry sales experience as a wine Sspecialist for WINE.COM.

Cinder House will soon be announcing several new additions to its wine program.  Launching in the next few weeks is “Make Way for Rose,” which will feature more than ten rosé wines by the glass as well as rosé tasting flights including a premium rosé wine flight available during Saturday and Sunday brunch.  Amping up the selection of wines by the glass, the restaurant will also introduce a “Luxury by the Glass” list, which will feature the best wines from Napa, Bordeaux, Burgundy, and other noted areas of distinction.  Then, on the horizon for fall 2022, is “SIPs and Swings,” a weekly tasting event that will include a special wine dinner. More details will be announced shortly on all of these events.